The Establishment of an Authoritarian Regime in South Korea: Until the Collapse of the Syngman Rhee Regime 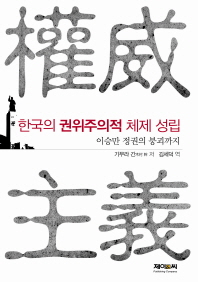 Why did so many colonized countries, which had longed for independence and self-governance, fall under authoritarianism after their liberation? While scholars have a vague sense that the charismatic leadership of authoritarian leaders resonated with the national desires of the post-colonial societies, case studies that deal with concrete history on the empirical level are rare.  Hence, The Establishment of an Authoritarian Regime in South Korea, which demonstrates how a newly liberated South Korea ended up in authoritarianism in the 1950s, is a much-needed work.

The author, a political scientist, recaptures the history of the Syngman Rhee regime, using political theories and concepts in a deft manner. He characterizes the era with the term “ruling-party authoritarianism,” which refers to a political regime where there is a democratic political system, but no possibility of a peaceful turnover of power. His analysis unfolds in two ways: how Rhee kept his power and presidency, and why the opposition party lost power. The key to both lay in colonial legacies. Rhee, who was known to have devoted himself to the independence movement abroad, enjoyed his reputation as a nationalist and a neutral leader, whereas the members of the opposition party, the Korea Democratic Party (Hankukminchutang), were accused of collaboration with the Japanese. Rhee secured his legitimacy by fostering a coherent national identity, as shown in his One Nation Ideology (Ilminchuŭi). In the meantime, he set up the ruling party, the Liberal Party (Chayutang), to maintain his power by transforming his decaying charismatic leadership into organizational dominance. The establishment and durability of the ruling party was facilitated not only by Rhee’s charisma and post-colonial sentiment, but also by effective administrative techniques inherited from the colonial government.

The book employs a post-colonial framework that goes a long way in explaining how ruling-party authoritarianism took hold in South Korea in the 1950s. Yet to understand why people were attracted to and voted for the regime, one cannot ignore the context of the Cold War and the Korean War. Charismatic leadership adapts to changing social contexts through the leader’s public discourse, as well as from his persona and personal history. This point is especially important considering that the balance of power between the ruler and his contenders did not shift irreversibly in favor of the ruling party, as the author assumes, and that the collapse of the Rhee regime did not put an end to charismatic politics in South Korea. Oppositional social forces broke the silence periodically instead of being tamed and losing their spirit forever. The remaining question is what moved the people, and it is undeniable that anti-communist sentiment, which oppositional forces shared with the ruling party and the authoritarian leader, was a significant source of motivation for people to seek out and to follow charismatic leaders. To conclude, this political history would have been even more compelling if it had taken into account the social context, which united the authoritarian leader and the people not only regarding the past, but also in their views of the present and their visions for the future.