Ethnic Politics: Theories and Practices in the 20th Century 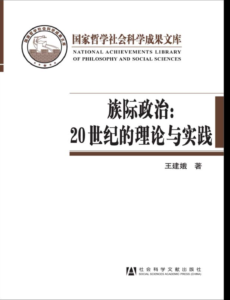 Wang Jian’e’s Ethnic Politics: Theories and Practices in 20th Century, selected from the Chinese National Achievements Library of Philosophy and Social Sciences, focuses on the world’s ethnic conflicts within theoretical and practical scopes. The author aims to unveil the essence of ethnic issues in modern multinational countries and to discuss the experience and lessons of ethnic politics, based on interpreting the origins, processes and changes of the world’s nationalist movements in a historical context.

The terror of wars and conflicts are features of the 20th century, pushing human beings to seek solutions to those violent confrontations. From Verdun to Auschwitz concentration camp, from the Nanjing Massacre to the Rwandan Genocide, from the population transfer caused by the partition of India to the ethnic conflict following  the breakup of Yugoslavia, each event has left not only horrible memories but also endless space for human beings to reflect on how to escape from violent behaviors. Why do ethnic tragedies happen? Why has nationalism been so emotionally appealing? How should humans prevent themselves from engaging in such violent conflicts? This book explores historical cases of ethnic issues in the world and sheds light on the theoretical origins and practical reflections towards such issues.

The arrangement of this book centers on the concept of “nation.” It first conceptualizes nation, nation state and ethnic issues, and then investigates the relationships between modernization and nationalism. In the author’s interpretation, nationalism exerts significant influence on nation-building and globalization. Following the section on old theories and concepts, the author then turns his attention to discussing multiculturalism and the political practice of multicultural countries coping with ethnic relations. In the last part, the author proposes solutions on how to construct the ethnic politics of pluralism.

In the author’s argument, ethnic relations are determined by the world nation-state system. The author clarifies that the balance between territorial sovereignty and the right of self-determination, the global roles of nation states, and the competition for resources among different ethnic groups all together account for the frequent ethnic conflicts in the 20th century. Aiming to reduce ethnic conflict, the author proposes to maintain differences and diversity, and to balance the distribution of wealth and power. Wang Jian’e advocates building a power structure and political framework, in accordance with international diversity and multiculturalism, to maintain the diversity of the world on the basis of political, economic and cultural equality.

This book stands out in its historical conception and its intention for theorization. The author possesses a broad and deep outlook of ethnic history and outlines a comprehensive theoretical landscape of world’s ethnic issues, ascribed to the author’s previous accumulated knowledge and insightful observations. However, as acknowledged in academia, it is challenging to create a theory to conclude all the cases of one field. The attempt of generalizing reality, unexpectedly, often leads to generalized conclusions or irrelevant statements—especially if those cases have little in common and the author is eager for a generalized theory.