Ethnic Vietnamese and the Khmer Rouge: the genocide and race debate 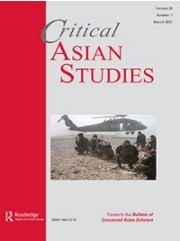 Abstract: This paper provides insights on the Communist Party of Kampuchea’s (CPK) ethnic policy through the dynamics of its relationship with ethnic Vietnamese in Cambodia during the 1970s. During Cambodia’s civil war between the CPK and the Lon Nol government, the CPK regarded Vietnamese in Cambodia as supporters of its political movement. The paper demonstrates that although class categorization undermined CPK treatment of Vietnamese and other minority groups (notably Chinese and Cham) throughout the four years (1975–1979) of Democratic Kampuchea (DK), internal plots, suspicions of non-Khmer people, and a war with Vietnam led to the expulsion of the vast majority of Vietnamese in 1975. Expulsion gave way to the mass murder from mid-1977 onward of many of the remaining Vietnamese and mixed-parentage children. By demonstrating how CPK notions of class outweighed those of race, the paper argues that CPK purges against Vietnamese should be understood within the framework of CPK efforts to eliminate suspected enemies from Vietnam rather than stemming from genocidal intent.