Ethnography of the Mountain Song: How to have Conversation with Song 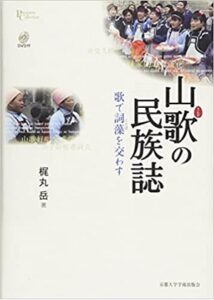 This book is an ethnography of “The Mountain song 山歌,” a reciprocal singing歌掛け of the Buyi people in Guizhou Province, China. Two types of mountain songs are presented: the “Han song漢歌” sung in Mandarin and the “Buyi song” sung in the Buyi language. This ethnography explores the origins of the mountain song in the Buyi community from three aspects: (1) the social environment, (2) linguistic interaction, and (3) the universal aspects.

In Part I, “The Social Environment of the Mountain Song,” the history and current situation of the mountain song are reviewed. First, the author discusses the ethnic category of “Buyi” through Foucault’s discourse analysis and Butler’s idea of agency. Historically, the mountain song has experienced the influence of Han culture and the policy of the Chinese government, and has been currently performed in a more visualized style. People, however, still emphasize the language domain as the core of mountain songs.

Part II, “Linguistic Interaction in the Mountain Song: Voice, Language, and Dialogue,” compares Han and Buyi songs from three perspectives: (1) meter and rhyme, (2) rhetorical techniques, and (3) interaction. Han songs are sung in Mandarin, and singers follow strict rules in which the melody is independent from the tone of the words. Buyi songs, on the other hand, are sung in the local Buyi language, and singers carefully match tone with melody, while the rhyme scheme is not as strict. Each song style is sung in specific artistic ways, based on the principles of everyday conversation in their language. In both cases, the tonal language is balanced with music in completely different approaches to maintain their communicative function.

In Part III, “A Play Theory of Reciprocal Singing: The Mountain Song as Play,” the author explores the universal characteristics of reciprocal singing in general. Specifically, the author compares the mountain song to the reciprocal singing in the Amami Islands in Japan, showing similarities and differences in the balance of the three axes of physical movement, musical expression, and linguistic expression. The author also shows that reciprocal singing is uniquely framed as a “play” that is detached from everyday life through Goffman’s and Bateson’s theory, arguing that the power of the voice plays a central role in activating this special kind of frame in the mountain song.

Reciprocal singing in East Asia has often been discussed as a form of “utagaki歌垣,” which is linked to love matchmaking or fertility rituals. This book vividly depicts, however, the mountain song in the Buyi community as a linguistic interaction, and as a universal frame of play detached from everyday life through the power of the voice. This book shows one of the pathways to approaching the diversity and universality of reciprocal singing around the world, which has been insufficiently studied.