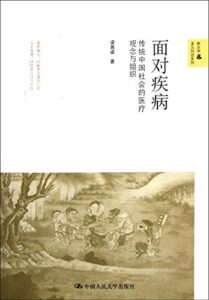 This book is not an entirely new work. Rather, the book “Facing Illness” retraces the intellectual path taken by the author, collecting some of her important contributions. Professor Leung Ki-che has been intensively engaged in working on China’s medical history for the past twenty years. The historical tracking of smallpox and leprosy (see chapter 3, 11-13) reflects her insights into the changing views on illness in Chinese society. Influenced by research paradigms of medical history in the West, Leung pays less attention to the charismatic role of doctors and of medical knowledge. Instead, she carefully portrays the various facets of the medical system of imperial China. Familiarity with the protagonists, including patients, businessmen, missionaries and female medical practitioners (see chapter 4 and 9), as well as with the organizations, including public and private medical institutions (see chapter 6 and 7), greatly enriches our understanding of how illness was constructed and transformed. Therefore, although the book is framed in a historical perspective, it goes beyond discussions in the discipline. Many chapters, such as chapter 5, entitled “Medical History and the Issue of China’s ‘Modernity’” (医疗史与中国“现代性”问题), address profound socio-political and institutional issues. There is a clear effort to connect medical history to China’s social and cultural environment.