The Festival of Liumang: The Liumang Narrative in Contemporary China 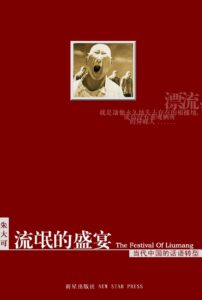 Literally, the two characters “liu-mang” (流氓) in Chinese refer to a floating population. In the contemporary Chinese linguistic, socio-political and cultural context, however, the word is usually understood to refer to a marginal and dangerous social group. The given English title of the book, which resists translating the Chinese word “liumang” into English approximations such as “gangster”, “hooligan” or “scoundrel”, reveals the author Zhu Dake’s intention. Zhu’s groundbreaking book endeavors to establish a competing discourse on this significant but largely overlooked concept in contemporary China.

Zhu Dake, born in 1957 in Shanghai, is one of the most active and renowned cultural critics in China today. In this book, which is probably his most famous, Zhu rejects the definition of liumang in its narrow and negative sense and extends it to a broader semantic configuration. Liumang in Zhu’s book challenges its current position in the dichotomy between inhabitants and vagrants, the state and the underground, the elite and the grassroots. Here, liumang regains its noble origin from Yu the Great (dayu), the legendary ruler of the Xia Dynasty, and finally comes down to a new image of a nomad who has lost his or her identity, still wandering around with haunting anxiety and anti-social impulses. The idea of liumang is understood as a constructive rather than destructive force in the cultural discourse of contemporary China. The book boldly asks questions such as “why has today’s China, an allegedly Confucian society, lost its courtesies and etiquettes that supposedly constitute our social norms? Why do rascal spirits and discourse (pizijingshen and pizihuayu) dominate our daily life? Why do the aesthetics of violence prevail in our cultural life? (P 8) For Zhu, liumang plays a vital role in understanding the inconsistencies and traumatic experiences in the course of constructing modern Chinese identity. Since the early twentieth century, the question has not only been central to intellectual and the mass debates, but also to lived political and cultural realities that have literally changed the historical path of the country.

Almost a textbook of liumang discourse, the book contains thirteen chapters, each preceded by an abstract. It ends with an appendix of the author’s earlier short essay: “The Psychoanalysis of Liumang”(1994). The introductory chapter offers a brief overview of Zhu’s definition of liumang and a literature review of previous research on the topic. Chapters One and Two examine the relationship among liumang discourse, statism and identity. Highlighted by Zhu as the “soul of the book”, Chapter Three theorizes three major forms of liumang language: the cool (kuyu), the erotic (seyu) and the filthy (huiyu). Secondly, the chapter summarizes the main rules of the liumang narrative, including the characteristics of the liumang narrator, the differences between liumang writing and liumang speech, and the establishment of liumang idols. Finally, five models of liumang discourse are formulated: the street rascal, the cynic, the thick black theory (houhei), the lower body (xiabanshen) and the avant-garde. Temporally situated in Chinese cultural history from the 1920s to the 2000s, the subsequent chapters are dedicated to detailed analyses of the five categories of discourse that circulate and nourish everyday language, music, poetry, novel, film, visual arts, fashion, architecture and mass media (mainly TV and the internet). With the assistance of numerous visual images inserted in the text, the book unfolds a panorama of Chinese liumang discourse that proves stunningly rich.

One of the most controversial but enticing elements of the book is Zhu’s original and imaginative use of Chinese language and rhetoric. He barrages readers with new words and semantic clusters built upon imageries of diverse colors, sounds and smells: “aesthetic earthquake”, “feast of signs”, “ethical explosion”, “ethical scent”, “index of vulgarity”, “hermeneutic disaster”, etc. As if engaged in a semiotic revolution, Zhu’s language challenges the predominance of a comfortably soothing writing style represented by, e.g., another famous Shanghai writer and cultural critic, Yu Qiuyu. More than a language game, Zhu’s embrace of sharp and conflict-ridden language speaks to a deeper purpose, that is, to demystify the established hegemonic discourse of “official speak”. The most stimulating part the book offers is the demonstration of a mass misreading and misinterpretation of texts of popular culture in modern China as a part of the aesthetics of liumang. In other words, Zhu not only shows how hegemonic discourses are constructed, but also how they are constructed through misunderstandings. Such discrepancies between the encoding and the decoding of the prevalent myths of Chinese society can be found in various popular memories, from the May Fourth Movement to the 1990s’ TV drama “Ke Wang”. These misunderstandings, according to Zhu, are fashioned in a masquerade between liumang and statist discourses. Such unveilings reveal the condition of (post)modernity in China. Whereas modernity in the West is marked by the death of God and consequent disenchantment and rationalization, the modernity discourse in China is still riddled with tensions concerning what the disenchantment, if there was one, is all about.

Interestingly, some of the chief merits of the book are also the most controversial. Zhu’s effort to depict liumang discourse as “a subversion of statist discourse, a discursive campaign which emancipates subjectivity from the prison of the identity of the other” (p 15) has made the conceptualization of “liumang” a semiotic metaphor rather than a de facto social group. Liumang, therefore, becomes difficult to identify due to its symbolic nature, which seems to be all-inclusive. The Baroque style of Zhu’s language sometimes eludes the reader. The wide spectrum of the liumang discourse in various texts hampers an in-depth investigation with a clearer main thread. Although Zhu claims that “Liumang discourse in a broad sense tries to conquer the entrenched discourse of statism while reestablishing a vast horizon of individual liberalism” (p 15), the question remains whether this highly fluid and fragmented discourse is able to subvert hegemony, or whether it actually consolidates the hegemony while eroding its own resistant capacity. In a Bahktinian carnival, can the normalized liumang discourse in contemporary China be also seen as, according to Paul Virilio, a collective silence and disappearance? Where, after all, does the power of liumang as a constructive force ultimately lie?

Yet the book can still be regarded as a leading if idiosyncratic work in the field of cultural studies in China, which brings me to one final remark about its theoretical genealogy. It seems that Zhu tries to construct his own independent kingdom of liumang discourse, based mostly on his original observations. Considering the fact that Zhu earned his PhD in Australia, an absence of any conspicuous reference to Western critical theories is noticeable. When recently the famous and infamous “leftist” professor Kong Qingdong publicized on his weibo micro-blog (the Chinese version of Twitter) that he had just refused, with a three-parallel structured name-calling, an interview request of a journalist from a “rightist” newspaper in southern China, the use of vulgar language by a supposedly social elite attested to the prevalence of liumang discourse. As this incident stirred vehement debates on the continuing confusion of the thinking public, we know that the festival of liumang in China is still being celebrated.