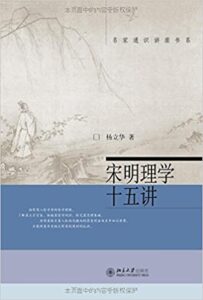 As a major topic of research in Chinese philosophy, studies on Neo-Confucianism have witnessed great development in the past thirty years. Not only has the range of studies on Neo-Confucianism been extended, but more and more diverse approaches have been introduced into this field, including intellectual history, social history, and local history. These new methods have generated a wider horizon of inquiry and a more vivid description of historic details. However, beyond the focus on historical analysis, there is still much work to do in the analysis of philosophical concepts. In fact, conducting intellectual analyses of representative philosophers and their theories endows philosophical studies with its identity – in name and in fact. In this sense, Fifteen Chapters on Neo-Confucianism sets an excellent example.

The methodology of Fifteen Chapters on Neo-Confucianism is also inspiring. The author’s profound understanding and his adept, engaging analysis of concepts allows him to successfully depict Neo-Confucian philosophy in a deep and accurate way. For example, by noticing the nuanced connection between image象 and form形, as introduced in Xi Ci《系辞传》, the author convincingly presents the distinct structure of Zhang Zai’s philosophy. When talking about the cause of phenomenal movements, the book is concerned about the relationship between Two两 and One一. Probing the reasoning in Zheng Meng《正蒙》, the book arrives at the conclusion that as the efficient cause, spirit神 lies in material气 rather than above it or behind it. Thus, the farfetched comparison between material in Chinese philosophy and in Western philosophy, especially in Aristotelian meanings, should be revised. Another example is the explanation of Zhu Xi’s philosophy. While previous studies recognized inevitability必然 and rationality应然 as the two connotations of Zhu Xi’s concept of principle理, the book shows that the meaning of inevitability is subsumed under rationality. As a result, principles in Zhu Xi’s philosophy should be understood as the concretization of rationality. Furthermore, the relationship between principles and material leads to the new understanding of principles: principles are not static forms in Plato’s philosophy, but are actually the unity of original mobility and moral inclination as embodied in every concrete being. From the minute difference between these key concepts, one can see the author’s achievement in illustrating Chinese philosophy through a more analytical and structured approach.

Apart from the analysis of concepts, the introduction of ‘spiritual history’ also adds beauty to this book. Spiritual history helps portray philosophers’ theory within a larger, macroscopic perspective of the spirit and ideas of a specific period, which makes it an indispensable and intriguing method to understand the history of philosophy. For instance, the discourse of intellectual elites in the early Song period and the connection among Cheng Yi程颐, Sima Guang司马光 and the political situation in the Yuanyou元祐 period, prove to be a useful means to reveal the complicated historical background of Neo-Confucianism.

Fifteen Chapters on Neo-Confucianism is written not in a vacuum, but in meaningful, interactive dialogue with former research on these philosophers. Besides the themes and methodology mentioned above, there are many unique opinions worthy of readers’ attention, as well. First, several neglected but important philosophers get particular emphasis, such as Shao Yong and Luo Qinshun罗钦顺. By pointing out the essential concepts of substance and function体用 in Shao Yong’s philosophy, the book gives an accurate presentation of Shao Yong’s theory; and putting Luo Qinshun in conversation with former thinkers including Zhang Zai and Zhu Xi, the author has grasped the essentials of Luo’s philosophy. Second, the explanation of Neo-Confucian philosophy is pretty well combined with the discussion of the studies of Zhou Yi《周易》, which stands as the most important intellectual background of Neo-Confucianism in the Song Dynasty. Third, the influence from Neo-Taoism in the Wei-Jin Period 魏晋玄学 is revealed and elaborated clearly. For instance, from the critical analysis in the book, one can see that Zhang Zai’s refutation of non-being is similar to Guo Xiang’s郭象 theory, and Zhang Zai’s discussion of heaven天 and Tao道 is probably inherited from Wang Bi’s王弼 language style. Being an expert both in Neo-Taoism and Neo-Confucianism, the author manages to outline the relationship between the two eras.

Professor Yang Lihua is a renowned scholar at Peking University. Fifteen Chapters on Neo-Confucianism is the culmination of his studies of Neo-Confucianism over the past twenty years. For further understanding of his research, readers may refer to other works by the author, such as Qiben & Shenhua: Commentary on Zhang Zai’s Philosophy《气本与神化：张载哲学述论》(2008) and On Guo Xiang’s Commentary of Zhuang Zi《郭象<庄子注>研究》(2010).