Fingerprinting and Modernity: Control of Moving Bodies and Technology of Governance 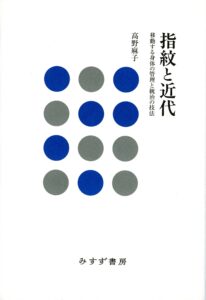 In the late nineteenth century, Henry Faulds, a Scottish medical missionary in Japan, became fascinated by ancient Japanese earthenware. Fingerprint stains discovered on pottery inspired him to eventually explore the characteristics of fingerprints. In 1880, Faulds published an article in Nature, which explained that every individual possessed a unique and invariable set of fingerprints throughout life. Although the article scarcely received scholarly attention at the time, it represents an important technological connection between the British and Japanese Empires. In her book, Takano Asako regards fingerprinting technology as the governance of moving bodies in the Japanese Empire and postwar Japan. She examines how the technology played a significant role in identifying laborers in Manchukuo, Japanese criminals, and foreigners in Japan.

In the first two chapters, Takano recounts the development of fingerprinting technology in the British and Japanese Empires. In the late nineteenth century, British police and scientists tried to formulate a way of governing immigration in colonial India because of a perceived correlation between migration and crime rate. Anthropometry was implemented for identification but proved unsuccessful due to how people’s appearances changed according to perspective age, and that recording such measurements required technical skill. Alternatively, as Faulds argued, fingerprints were unchangeable and peculiar to each individual, thereby becoming an innovative method for identification.

In the next three chapters, Takano illustrates how the Japanese Empire utilized this new technology to govern the people of Manchukuo. Originally, the Manchukuo provincial governments and the South Manchuria Railway Company tried to use fingerprinting technology to identify individuals or workers. Their project came to a standstill at that time but the Manchukuo authorities finally implemented a registration of fingerprints to control laborers in 1938, because of the Second Sino-Japanese War in 1937, which resulted in a severe lack of labor power. Over the course of the next two years, 2.4 million sets of fingerprints were collected and manually sorted by skilled workers. The fingerprinting system worked satisfactorily: once a laborer ran out of a coal mine due to its harsh working conditions and went on to serve as a civil engineer under a false name, he would be identified and caught in as little as 22 days by the coal mine administrator due to his fingerprints in the coal mine registry. The Manchukuo government went on to make an attempt at expanding the scope of fingerprinting from labor management to that of nation building. In 1943, the government finally enacted the National Book Law (国民手帳法). The law was long-awaited because the national books would include fingerprint information on most of the population. However, distribution of such books was never put into practice due to the intensifying war.

In the last two chapters, Takano examines the imperial legacy of fingerprinting in postwar Japan. The late 1940s witnessed a succession of scandalous murders with Japanese police facing considerable difficulty in identifying culprits. In response, a registration of fingerprints to better facilitate criminal investigations was suggested. Although they could not establish a mandatory fingerprint registration law, prefectural police encouraged citizens to voluntarily register their prints from 1950 onwards. Yet, such registrations were soon discontinued due to a lack of legal basis. Such fingerprinting technology was also used by the Japanese police to better control foreigners living in Japan. In 1952, the Foreigner Registration Law (外国人登録法) came into effect, which forced foreigners to register their fingerprints with the state. Most of the foreigners were Korean (zainichi 在日韓国・朝鮮人), who were inspected and subsequently discriminated against by the Japanese government even after 1945.