Flying Dragon in Luoyang, Record of Three Generations of Literary Talent, and Records Showing the Distinction between Right and Wrong 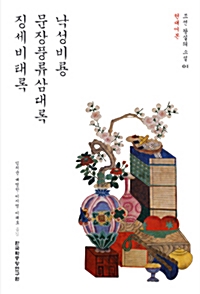 The Naksŏnjae collection which was originally stored in the Naksŏnjae building of the Ch’angdŏkgung palace includes appealing masterpieces of classical Korean novels. They were commonly enjoyed by women readers of the royal palace during the late Chosŏn period. This collection encompasses forty full-length novels in approximately one thousand and two hundred beautiful volumes written in classical Korean; with other royal archives these novels are located at the Changsŏgak library of the Academy of Korean Studies (AKS).

Though previous research on the Naksŏnjae archives has produced scholarly theses, articles, and monographs since the 1980s, ordinary readers still encounter difficulty in reading and understanding the original texts. Therefore, based on the Korean classical novels among the Naksŏnjae archives, these new source books have recently been published. This project is the very first step of a ten-year plan for the annotation and translation of the Naksŏnjae version of the novels into contemporary Korean.

For the annotation volume, the participants of the project clarify the meaning of old vocabulary and correct errata along with punctuating the original texts. They also provide readers with detailed information about historical figures in the novels. This new annotation is the product of an interdisciplinary collaboration of six specialists in the area of classical Korean literature and old Korean language. Through their steady and patient efforts, this annotation allows readers to get closer to how Koreans might have thought in premodern society.

The translation volume is sensitive to the needs of ordinary readers who are not experts in classical Korean novels. The translators recognized the vast chasm separating specialists and common readers in understanding classical texts. From the classical novels, contemporary readers can learn diverse expressions of traditional Korean values like loyalty and filial piety. They can also experience interesting key motifs of classical literature: love, family, war, and fantasy. Readers may eventually feel that these values and motifs are still important in order to have a good grasp of contemporary Korean literature.

Interestingly, the spatial background and main characters of the three novels examined for this project came from China. In particular, Munjangpungnyu samdaerok and Chingsebitaerok use historical figures who existed in Song and Qing China respectively. China was a place that they had hardly visited but knew well. By using a foreign backdrop, the authors could justify values and expressions of which the Chosŏn elite class disapproved.

Professor Ch’i-kyun Lim of AKS, the organizer of the project, has continued to promote the popular understanding of Korean classical novels for contemporary readers. His achievements include new writings with intriguing motifs in Chosŏn fiction as well as translations and academic research on classical novels. These efforts are expected to be a strong base for the successful completion of this long-term project on the Naksŏnjae collection.