Gender, Romance and Marriage of Chinese Youth During the Cultural Revolution (1966-1976) 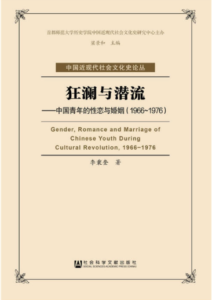 This book is the first systematic study on private life during the Cultural Revolution (CR). Existing scholarship on the CR centers on two respects: political struggles at the top and social chaos at the bottom. Political propaganda, policies, ethos, thoughts and behavior have taken the center stage in academic works. However, an important aspect of the CR, private life, has to a large extent been ignored. With the rise to prominence of studies on quotidian life in the social sciences, as well as the ascendance of oral history and collective memories in the new millennium, Chinese scholars are increasingly drawing on new methods and data to excavate social history in the CR to gain new insights. This book is a good example.

On the basis of oral history, this research focuses on the most intimate aspects of social life – sex, love and marriage in the CR. The book is divided into four parts. The first part explores sex and love among youth in cities; the second depicts the shifting criteria of mate selection among youth; the third part turns to rural youth; and the final part portrays the sexual life of the educated youth in rural areas. This research shows us a different aspect of the CR. According to conventional wisdom, due to the dominance of ‘asceticism’ throughout the CR, all kinds of discussions on love and sex in public were forbidden. Love became a taboo, sex became an evil behavior, and romance became a ‘capitalist’ synonym. However, with regard to Li’s findings, this is proven untrue. Especially after 1968, the youth in big cities, like Beijing, Shanghai and Guangzhou, tired of politics and ideologies, were keen on dating and flirting, which culminated in the 1970s. In Beijing this phenomenon was called Pai Pozi, which means dating just for fun.

Apart from cities, free love became more popular in rural areas. This was partly ascribed to the campaign of demolishing the Four Olds, in which marriage customs of the feudalist tradition—such as arranged marriage, forced marriage, exchanged marriage and purchased marriage—bore the brunt of eradication. In these circumstances, the betrothal gift was decreased to a large extent, and marriage based on free love became trendy. As a consequence, the matchmaker as an occupation faded away in cities and rural areas. However, feudalist marriages were revived again during the later stage of the CR, which demonstrates that even the CR did not eradicate the ingrained Chinese tradition.

The final part of the book elaborates on the sexual life of the educated youth during the Up to the Mountains and Down to the Countryside Movement. At the end of 1968, promoted by Mao, the educated youth were sent down to the countryside. The huge discrepancy between ideality and rural realities led to a great depression and a strong sense of loss. Bored by the monotony of life and stimulated by hormones, the educated youth engaged in sexual abuse among themselves in the countryside. However, sex without marriage was deemed an indecency and a crime in rural areas. Local cadres, without judicial procedure, could immediately sentence a youth, once spotted having sex, to death on the spot. According to the memories of some of the educated youth, some local cadres took advantage of their official positions and raped many sent-down girls, who dared not to resist.

This book sheds light on many different aspects of private life in the CR. It not only enriches our understanding of the common people’s quotidian life, but also challenges our conventional understanding of marriage and sex in this extreme period.