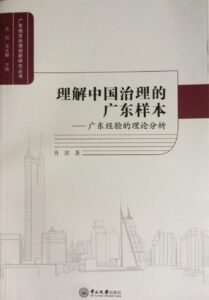 Guangdong Province has a long history of being regarded as the frontier zone for reform and transformation in China, and has subsequently received continuous academic attention over the past few decades. In 1987, Prof. Ezra F. Vogel (Harvard University) spent more than eight months in Guangdong Province studying the reasons behind such leading economic reform in the coastal region. Insightful comments were detailed in his subsequent book entitled One Step Ahead in China: Guangdong Under Reform (1989). Nearly three decades later, Prof. Bin Xiao from Sun Yat-sen University, a former Harvard-Yenching Institute Visiting Scholar (2000-2001), wrote a book titled Understanding Governance Samples in China: A Theoretical Analysis of Guangdong Experience in which he endeavors to examine the political development and innovations in governance in the same region during the past four decades.

For more than ten years, Prof. Bin Xiao has worked on local political development in China. In the 2000s though, his academic interests shifted to the politics of contemporary China. Prof. Bin’s newest book is his second publication on Chinese politics, alongside many other papers. It consists of seven sections in which he provides a comprehensive picture of the governance innovations in Guangdong Province since 1978. Local governments in Guangdong have introduced various administrative and political adjustments in order to enhance their capacity to deal with challenges and crises in the transformation era. Those innovative experiments are the key components of the Guangdong Model of political development.

This book contributes to understanding the political development in China both by highlighting innovative cases and providing a systematic analysis of their origins and dynamics. In the introduction, Prof. Bin Xiao tries to understand the political development in Guangdong Province in the context of the modernization of Chinese governance, which is the key for the Chinese Communist Party to maintain regime legitimacy and adapt to transformational challenges. The second chapter reviews the history of Guangdong’s political development over the past 40 years. Based on his observations, Guangdong, as one of the pioneer regions of political reform in China, has achieved considerable improvement in terms of rule of law, democratization and participation in governance. These political reform experiments launched in Guangdong Province could shed light on the future of modernization of governance throughout China.

The following four chapters illustrate innovative cases at the prefecture, county and village level in Guangdong. Chapter three introduces governance with cyber accountability in the He Yuan Prefecture region. It indicates that pressure from cyber participation has increased responsiveness and accountability, while limitations to establish the accountability of government were still prominent. Chapter four, taking the Shunde District as a case study, focuses on the holistic political reform at the county level. The Shunde government rebuilt the governance structure both vertically and horizontally, which included promoting the reform of mega departments (dabuzhi) and empowering market actors, social organizations and local citizens to participate in local policy making. This new governance model provided a positive example for China to deepen its political reform but also faced constraints from the socialist regime which was heavily reliant on support from the provincial government. The other two chapters address grassroots democracy development, in which the author attempts to answer the question of how to achieve “good governance” at the village level. Based on the Xia Wei Village case in Guangzhou, Xiao found that the deliberative civic engagement of villagers in dealing with public affairs, rather than a democratic vote or minimizing size of the community, proved key to maintaining the quality of grassroots democracy. In the final chapter, the historical origins of the Guangdong Model of political reform are reviewed and its characteristics summarized. The outlook for political development in Guangdong is also presented.

This book provides important information about political development in Guangdong province while also illustrating that limitations still exist today. There is no doubt that such governance innovations have had a positive impact on maintaining social stability and promoting economic growth. Yet, it is worth mentioning that all of the governance innovations highlighted in this book remain highly constrained. Those top-down local innovations are conducted with the permission of either the provincial or central government. It is therefore more appropriate to classify them as political adjustments within the socialist regime to enhance its resilience, rather than political reforms. In addition, it is too early to regard these experiments of governance as models. Diffusions of the local governance innovations, even within Guangdong Province, are still rare. The author also clearly admits that the achievements in terms of rule of law, grassroots democratic governance and civic engagement in Guangdong are still also quite limited.