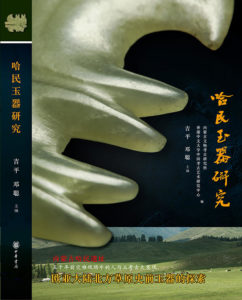 Hamin, located in Inner Mongolia, northeast China, is a large Neolithic settlement site surrounded by moats dating back to 5500 to 5000BP. Excavations during five field seasons, from 2010 – 2014, were carried out by the Inner Mongolia Provincial Institute of Archaeology. 78 semi-subterranean houses were uncovered, which were generally arranged in rows. From 17 of these houses, 84 pieces of jade were found, 88 percent of which was associated with burnt human skeletons which were found to have had abnormal deaths. Hamin Jades is a fabulous product of the collaborative work on jades from Hamin conducted by the Center for Chinese Archaeology and Art, the Chinese University of Hong Kong, and the Inner Mongolia Provincial Institute of Archaeology. Compiling detailed descriptions of in situ context, with high resolution photography, micro-wear analyses, and comparative studies in a broad Eurasian horizon transcending borders, this book combines micro and macro perspectives on jade study.

According to the archaeological context and physical anthropological study of human skeletons, the site is considered a ‘freeze-frame’ of a catastrophic moment, when over half of the population died possibly through an acute infectious disease leading to the whole site being burnt. This book innovatively applies analytical methods from Disaster Psychology and Thanatology to analyze the dynamic relationship between jades and humans when the settlement was suffering from a disaster. Based on the spatial relationship between houses with jades and human skeletons, as well as the proportion of jades and individuals, this book describes the change in disposal methods regarding the deceased individuals and redistribution of jades owned by the deceased during the deteriorating disaster, a dynamic process in which social habitus, lineage, spiritual beliefs, and value systems interacted.

Jades from Hamin are compared to those from the contemporaneous Hongshan culture, the most prominent jade-using culture in northeast China from approximately 6500 to 5000BP. This book analyzes the crafting technology and spatial-chronological change of “hook-cloud” shaped jades originating from Hongshan culture to interpret the simplified version of the same artifacts from Hamin. The possible exchange of information and final products between Hamin and Hongshan, as well as production technologies marking cultural boundaries, are explored.

Furthermore, by locating Hamin jades in a broader Eurasian context, this book argues the co-existence of two jade production technological systems in Northeast Asia, with differences in raw materials, particular techniques such as sawing and drilling, as well as the typology of the final products. From the aspect of raw materials, two geological sources of nephrite in the Baikal region, Russian Siberia, and Xiuyan, northeast China are compared, which are also the only two sources acquired by ancient people. The white translucent Baikal nephrite is easily distinguishable from the yellow-green nephrite from Xiuyan, and both these two types were found in Hamin and Hongshan assemblages. The white translucent nephrite is found in many sites located in Heilongjiang, Jilin, Liaoning and Inner Mongolia, northeast China. However, due to the lack of scientific excavations and stratigraphic data, the chronology of these objects has remained blurred for some time. Recent excavations at Houtaomuga, Jilin Province, Nanbaoligaotu, Inner Mongolia, and Hamin have shed new light on both the chronology of white translucent nephrite jades and the exchange mechanism of raw materials and technology between northeast China and the Lake Baikal region in Russian Siberia. Regarding particular techniques, two major systems of drilling techniques are suggested. In the north is Semenov’s hypothesized drilling device, analogous to beam compasses originated from the Lake Baikal region, which largely but not completely overlaps with the distribution of white translucent nephrite in northeast China. Further south is Tang’s reconstructed high-speed rotary device, which is mostly associated with a Xiuyan type yellow-green nephrite. As for the final products, the most elaborate jade objects from Hongshan culture are all made of yellow-green Xiuyan-type nephrite, while white translucent Baikal-type nephrite is mostly associated with rings and disks, which corresponds with a long tradition of personal ornaments widely distributed in Russian Siberia since the Upper Paleolithic time.

In addition to a technological perspective, this book explores the origin of symbolic organized behavior associated with the Upper Paleolithic revolution and the development of Shamanism in Northeast Asia. Remote distance and long periods of time are crossed by analyzing the continuity of human behavior, in which the use of personal ornaments, in the form of jades during the Neolithic time, are actively involved. This sheds new light on the symbolic meaning and social use of jades from the Hamin site.

In summary, this book establishes an exemplary model for jade study. The interdisciplinary methodology, detailed technological analyses, clear illustrations, and broad horizon all make it an outstanding work. Moreover, the high-resolution photography makes it a comprehensive database of jades from Hamin and other sites within Northeast Asia, which is extremely important for further studies. The study of jades transcending borders and the division of the Paleolithic and Neolithic opens a new direction for future comparative studies and dialogue between different jade-using communities crossing huge spatiotemporal gaps, which promises to be significant.