A Historical Outline of Daoist Rituals before the Tang Dynasty 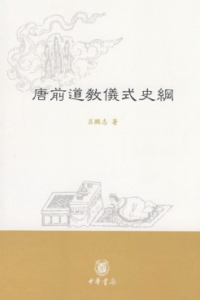 A Historical Outline of Daoist Rituals before the Tang Dynasty is a thoughtful scholarly book about the historical development of Daoist rituals before the Tang (A.D.618-907), written by Lü Pengzhi 呂鵬志, an associate professor in the Institute of Religious Studies, Sichuan University. The book is divided into 15 chapters, discussing circumstances and interrelationships of various Daoist Sects’ rituals in different periods, from the establishment of Daoism in the late Han (B.C.25-A.D. 220) through the Tang dynasty. The author believes that there were three traditional rituals in Daoism before the Tang, namely the ritual of the Way of Celestial Masters (tianshidao yishi 天師道儀式), the ritual of Fangshi (Fangshi yishi 方士儀式), and the ritual of Lingbao (Lingbao keyi 靈寶科儀). The ritual of the Way of Celestial Masters was founded in the late Han when this Daoist sect rose in Southwest China, then spread into North and South China in the Six Dynasties (A.D.220-589). The ritual of Fangshi was founded in the Warring States Period (B.C.475-B.C.221), then became an important component element of Daoism and spread widely across South China. The ritual of Lingbao was founded during the Eastern Jin dynasty (A.D.317-420). It was the result of an accommodation among the Way of Celestial Masters, Fangshi tradition, and Buddhist teachings, and could be found in the ancient Lingbao scriptures around the period of the Liu-Song dynasty劉宋（A.D.420-479. It became the most influential ritual in Daoism after the compilation of the famous Daoist Lu Xiujing 陸修靜 (406-477).

The book describes the concrete situations and interrelationships of these various traditions. The author concludes that, from the 5th century on, many Daoist sects adopted the ritual of Lingbao, and “Lingbao-nization” was the main trend of Daoist ritual development. With this general and crucial conclusion on the development of Daoist rituals before the Tang dynasty, based on primary and secondary sources in this field, the book also revises some existing academic viewpoints. The author also illuminates the relationship between Buddhism and Daoism at that time, from the new point of view of “ritual”. In his preface to the book, Professor John Lagerwey, Director of Research of the Ecole Pratique des Hautes Etudes (Paris) claims that this book is “a work that the whole field of Daoist Studies will welcome as the first mature study of Daoist ritual in its foundational period”.