The History of Christian Social Welfare in Japan from the Perspective of Local Practice: From the Modern Period to the Post-WWII Period 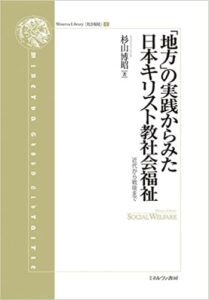 In the Meiji period, the Japanese government did not formulate public social welfare policy; individuals and groups voluntarily established private social welfare organizations. Japanese scholars have investigated the pioneering role of Christian social work from the 1880s to the 1930s by looking at its leading figures, such as Ishii Jūji (石井十次), Tomeoka Kōsuke (留岡幸助), Yamamuro Gunpei (山室軍平), and Kagawa Toyohiko (賀川豊彦). This grassroots work declined in the 1930s and 1940s because government responsibility for welfare increased after the 1929 passage of the Poor Relief Law (Kyūgohō 救護法) and the series of welfare laws (the so-called Fukushi sanpō 福祉三法) enacted between 1947 and 1950.

In this book, Sugiyama Hiroaki argues that these new welfare policies did not benefit people in all local areas, and that Christian works still played a significant role in alleviating their problems. He aims to shed light on lesser-known Christians, who practiced Christian benevolence in local areas from the Meiji period through the post-war period. Sugiyama has long been working on the history of Christian social welfare in Japan and has published several monographs on the subject; this new book consists of chapters that were published as journal articles between 2007 and 2015.

Most notable is the volume’s Part III, which comprises chapters about the practices of Christian social work in local areas. In Chapters 8–11, Sugiyama demonstrates the function of social welfare in “agricultural area evangelism” (nōson dendō 農村伝道) from around 1930 until the 1950s. After depression and famine struck around 1930, some Christians built nurseries to lessen the burdens on farmers. For example, in 1929 Ishida Hideo (石田英雄), acting through a Congregational church, initiated social welfare works in Sone (曽根), Hyōgo Prefecture, while the National Christian Council Japan (Nihon Kirisutokyō Renmei日本基督教連盟) launched a special group for aiding people in the Tōhoku region in 1934. Some involved in agricultural area evangelism took their work to Manchuria, founding the Mauchu Christian Settlement (Manshū Kirisutokyō Kaitakumura 満州基督教開拓村). After WWII, the United Church of Christ in Japan (Nihon Kirisuto Kyōdan 日本基督教団) inaugurated a 25-year plan for rural evangelism in 1947. Yet because these activities did not result in the spread of Christianity in these areas, scholars have tended to overlook the history of Christian social welfare in rural regions.

In other chapters, Sugiyama explores the local history of Christian social work by spotlighting less well-known Christian figures. In Chapter 7, he explores the work of Misono Terejia (Theresia) (聖園テレジア), who was originally from Germany, and who organized the Daughters of the Sacred Heart (Seishin Aishikai 聖心愛子会) in Akita Prefecture. In the 1920s and 1930s she established nurseries in Akita, as well as in Okayama, Nagoya and Yonago. In Chapters 12 and 17, Sugiyama examines the administration of the leper sanatorium called Wakōen (和光園) in Amami Ōshima (奄美大島). The influence of Catholicism at the sanatorium prompted inmates’ protests against the compulsory abortion being forced upon lepers. Matsubara Joan (松原若安), a Catholic and an office worker at Wakōen, supported the protests and helped the residents give birth to and raise their children. In Chapter 16, Sugiyama recounts the biography of Hattori Danjiro (服部団次郎), who in the late 1960s actively performed charitable works as a Christian practice, when his Christian contemporaries were inclined to retreat from society into theological pursuits. Before World War II, Hattori evangelized at a leper sanatorium in Okinawa called Airakuen (愛楽園), and after the war worked as a mine worker and preached to miners in the Chikuhō (筑豊) area in Fukuoka Prefecture.

Sugiyama uses as his sources not only major Christian newspapers such as Nihon Katorikku Shinbun (日本カトリック新聞), but also previously unacknowledged periodicals that he found in local churches; therefore this new book contributes substantially to the scholarship on the local history of social welfare in Japan. I believe, however, that he could have developed a wider perspective on this topic than the mainly Christian point of view that characterizes this book. In Chapter 2, he traces the history of Christian welfare organizations from a non-Christian viewpoint, and explains how donations from the leading non-Christian capitalist Shibusawa Eiichi (渋沢栄一) helped create various welfare organizations. The chapter succeeds in showing the multiple actors who were involved in the social welfare movement. Yet despite the unique perspective advanced in this chapter, Sugiyama did not go on to apply this view to other chapters and seems to have paid little attention to the non-Christian supporters and local administrators who contributed to some extent to the movement of Christian social welfare. Examining the complicated relationships between non-Christian donors, municipalities, and Christian workers would have made this volume all the more valuable.