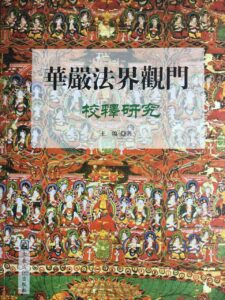 Different “schools” and “traditions” have always been an inevitable topic in the study of Buddhism in East Asia. To get a better understanding of these terms, besides more multi-dimensional perspectives and theoretical reflection, it is always necessary to consult to the basic literature. Wang’s book about the Huayan fajie guanmen华严法界观门 (literal translation: the Gate of the Vision of Huayan Dharmadhātu) is a good example of such an attempt. As one of the most creative works in the Huayan School, the Guanmen plays an important role in Buddhist intellectual history in China as well as in Korea and Japan. Focusing on Bensong本嵩’s two hermeneutical works related to it, which has long been lost or neglected by scholars, this book offers a fundamental historical and philosophical study about this important work.

The “research part” of the book includes three chapters. Chapter 1 gives a philological and historical research of the Fajie guanmen. Although this work was traditionally attributed to Dushun杜顺, the “first patriarch of the Huayan School”, by surveying the rendering of Dushun’s image during different historical periods and early practice in the Huayan tradition, this book concludes that Dushun represented the very group within the tradition which focused more on devotional practice rather than doctrinal learning. The attribution to Dushun by the “doctrinal-learning group” shows their quest for legitimacy. And by a close comparison of texts, the author holds that the Guanmen is more closely related to Fazang’s work in terms of its content and format.

Chapter 2 is a philological and historical research of the commentaries of the Fajie guanmen. By scrutinizing the historical records of all the traceable commentators, this book points out that after the time of Jingyuan净源 in the Song Dynasty, most commentators concentrated in Jiangsu江苏 and Zhejiang浙江, which differed from former periods when commentators could be found both in southern and northern China. Among all the commentaries, Bensong’s Fajie guanmen tongxuanji法界观门通玄记 which had long been lost and was rediscovered in Japan last century is especially surveyed in detail.[1] Apart from an introduction about its editions and Bensong’s biographical records, the intellectual tendency of combining the two traditions of Huayan and Chan at that time is emphasized as the crucial context for the production of this work, and for the understanding of his two other works pertaining to the Guanmen—the Fajie guan sanshimen song法界观三十门颂 and the Huayan qizi jingti华严七字经题.

Chapter 3 discusses the Fajie guanmen and its commentaries from the perspective of intellectual history. It is held that in the Guanmen, Madhyamaka philosophy and Tathāgata theory are weaved together in a critical way, which makes possible the doctrine of “universal inter-comprehensiveness” 周遍含容 which constitutes the most elemental teaching of Huayan School. This book also discusses how Chengguan developed his theory of the “four realms of dharma”四法界 based on the Guanmen, and its role in the convergence of the two traditions of Huayan and Chan and in the acceptance and adaptation of Buddhism by Neo-Confucianism.

In the second part of this book, a comprehensive collection of works pertaining to the Guanmen is presented, among which the Tongxuanji by Bensong and the Fajie guan zhideng shu法界观智灯疏 by Shaoyuan绍元 are academically annotated for the first time. In the annotations the author not only presents necessary historical and philological information in detail, but also keeps a keen eye on the literal tradition and evolving dynamics in Buddhist intellectual history shown between words and lines. This in particular makes this book a good foundation for later research among scholars.

Wang’s work shows a good example of getting “back to the basics” in the field of Buddhist Studies. Through this systematic collection and meticulous treatment of basic materials, one may expect the opportunity to get a closer understanding of the intellectual entanglements and dynamics among “Buddhist schools” as well as of the term “Buddhist schools” per se.

[1] This edition preserved in Rissho University Library was published in 1999. Recently, the Chinese Scholar Gao Shanshan高杉山 reported his new discoveries of remaining folios different from the edition in Rissho University, among which the Volume Two of the Tongxuanji was never seen before. And a commentary to the Tongxuanji in Tangut is also discovered by him. See: 高山杉《新获明版〈华严法界观通玄记〉残页》，《上海书评》384期，2016年6月12日；《〈通玄记〉西夏文注疏之发现》，《南方都市报·阅读周刊》，2016年5月22日；《首次刊布的〈通玄记〉卷下明版残页》，《上海书评》409期，2016年12月4日.