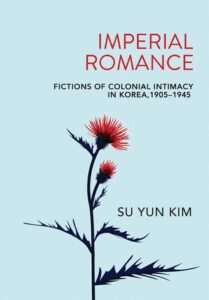 About the book: In Imperial Romance, Su Yun Kim argues that the idea of colonial intimacy within the Japanese empire of the early twentieth century had a far broader and more popular influence on discourse makers, social leaders, and intellectuals than previously understood. Kim investigates representations of Korean-Japanese intimate and familial relationships—including romance, marriage, and kinship—in literature, media, and cinema, alongside documents that discuss colonial policies during the Japanese protectorate period and colonial rule in Korea (1905–45).

Focusing on Korean perspectives, Kim uncovers political meaning in the representation of intimacy and emotion between Koreans and Japanese portrayed in print media and films. Imperial Romance disrupts the conventional reading of colonial-period texts as the result of either coercion or the disavowal of colonialism, thereby expanding our understanding of colonial writing practices. The theme of intermarriage gave elite Korean writers and cultural producers opportunities to question their complicity with imperialism. Their fictions challenged expected colonial boundaries, creating tensions in identity and hierarchy, and also in narratives of the linear developmental trajectory of modernity. Examining a broad range of writings and films from this period, Imperial Romance maps the colonized subjects’ fascination with their colonizers and with moments that allowed them to become active participants in and agents of Japanese and global imperialism.