Imperiled Destinies: The Daoist Quest for Deliverance in Medieval China 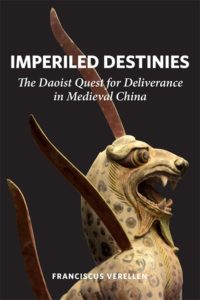 About the book: Imperiled Destinies examines the evolution of Daoist beliefs about human liability and redemption over eight centuries and outlines ritual procedures for rescuing an ill‐starred destiny. From the second through the tenth century CE, Daoism emerged as a liturgical organization that engaged vigorously with Buddhism and transformed Chinese thinking about suffering, the nature of evil, and the aims of liberation. In the fifth century, elements of classical Daoism combined with Indian yogic practices to interiorize the quest for deliverance. The medieval record portrays a world engulfed by evil, where human existence was mortgaged from birth and burdened by increasing debts and obligations in this world and the next. Against this gloomy outlook, Daoism offered ritual and sacramental instruments capable of acting on the unseen world, providing therapeutic relief and ecstatic release from apprehensions of death, disease, war, spoilt harvests, and loss. Drawing on prayer texts, liturgical sermons, and experiential narratives, Franciscus Verellen focuses on the Daoist vocabulary of bondage and redemption, the changing meanings of sacrifice, and metaphoric conceptualizations bridging the visible and invisible realms. The language of medieval supplicants envisaged the redemption of an imperiled destiny as debt forgiveness, and deliverance as healing, purification, release, or emergence from darkness into light.