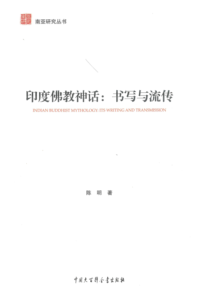 Chen Ming is a reputed scholar known for his research on ancient Indian medicine in China and for his marvelous Chinese translation of a Sanskrit text, Siddhasāra. In his most recent work, he seeks to collate and discuss the descriptions of Indian Buddhist mythology and its transmission in Chinese Buddhist scriptures. This book consists of twelve chapters that can be subsumed under four categories. The first three chapters illustrate the origins and evolution of the creation myth, cosmic structure of “Triple-thousand great one-thousand worlds (三千大千世界),”and the lineage of Buddhist Gods. The second section clarifies the translation of Indian gods’ names and the cultural transformation that occurred during the process of translation. Meanwhile, through the analysis of translation and dissemination of Buddhist texts, Chen exemplifies that the stories surrounding the Indian goddess spread to the Chinese people and become a part of their beliefs. The remaining two sections are concerning some specific myths or tales. For example, the author discusses: “thousands of flowers on medicine trees in snowy mountains,” “a bee gathering honey from flowers,” “the swan king distinguishes milk from water,” and “three fish.”

Mainly based on pre-modern Buddhist literature, the book examines the origins, the evolution, and especially, the dissemination of Indian Buddhist myths in China proper. There is much in this study to commend. The first chapter enumerates all the texts containing Buddhist cosmogony. In comparison to the Saṅghabhedavastu (《根本说一切有部毗奈耶破僧事》), Chen clarifies the storyline of Buddhist genesis in Chinese versions of the Buddhist scriptures. The striking feature and utility of this book is the densely-informative tables containing detailed documentation of the nomenclature from diverse scriptures. The collation of translated appellations and their corresponding Sanskrit words is conducive to research on the process of Buddhist myth dissemination. These tables, which epitomize the meticulous effort put in by the author, can serve as a valuable reference for specialists in the transmission and reception of Indian myths in China. The book’s remaining sections contain information regarding a couple of specific Indian myths, such as “drying up the ocean,” “legend of Ekaśṛṅga sage,” and “traces of Indian myths in Buddhist manuscripts from Dun huang.” At readers’ convenience, the format of this section offers a contrast between Sanskrit texts and different versions of translations including English.

However, Chen’s work is unfortunately devoid of a conclusive chapter. In the absence of closing remarks, the overall framework of his study has become a bit discursive. Such discursiveness has obscured rather than illuminated the intriguing issues being examined in Chen’s work. Furthermore, the author does not touch upon the chronological and evolutionary lineage, nor does he consider the structural and logic problems with his chapter layout. Firstly, it is confusing to insert two chapters describing Indian tales with animal protagonists (eg. the swan king, the bee, the fish). This results in a discordance within the book due to such stories deviating from the definition of mythology, which should be a collection of myths, especially one belonging to a particular religious or cultural tradition. Obviously, the tale of “three fish” belongs to allegory. Secondly, his seventh chapter remains estranged from the chapters which surround it. This chapter regarding “medicinal trees”, which is the author’s field of expertise, appears as a separated section, weakly linked to the rest of the layout of the book. In the sixth chapter, Chen has a tendency to entangle analysis in medicine and disease as well. The above blemishes, to a large extent, eclipse the book and lead to the book’s content deviating from its title.