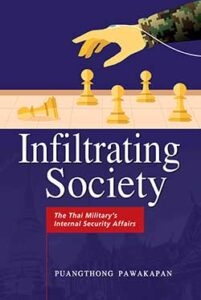 About the book: “Thai politics is driven by actors and actions of paradox such as anti-election movements for accountability or independent, partisan organizations. This lucidly written book uncovers the ‘military-led civil affairs’ that earn the armed forces the omnipotent role in Thai society. It enriches our understanding of the Thai military in both empirical and theoretical ways. Empirically, the book illuminates how the soldiers have been intensively involved in supposedly civic activities ranging from forest land management to poverty reduction. Such long-lasting and extensive involvement means the military could mobilize the organized mass of over 500,000 strong when necessary. Theoretically, readers will learn how an ideological discourse (‘threats to national security’) has been continuously redefined to serve the military’s evolving political and rent-seeking missions from the Cold War era to the twenty-first century. It also traces the persistence and mutation of this highly adaptable organization, the one that knows when to roar and when to camouflage. Still waters run deep; Thai military operations run deeper and wider.” –Veerayooth Kanchoochat, Associate Professor of Political Economy, National Graduate Institute for Policy Studies (GRIPS), Tokyo

“A truly monumental work about Thailand’s military from the 1960s until today, this solid study focuses upon the armed forces’ internal security role across Thai society, how the military has succeeded in legitimizing itself and boosting its power as a counterinsurgency force, guardian of monarchy and engine of development. The book also valuably looks at the military’s establishment of mass organizations beginning during the Cold War and mobilization of royalists since 2006. The book thus illustrates how the military has been able to enhance and sustain its overwhelming influence and is thus a valuable study for anyone wanting to understand key power-brokers in Thailand.” –Dr Paul Chambers, Center of ASEAN Community Studies, Naresuan University, Thailand

About the author: Puangthong Pawakapan was a HYI Visiting Scholar from 2018-19.