Insider Story: A Learned Evaluation of “One Country Two Systems” in Hong Kong 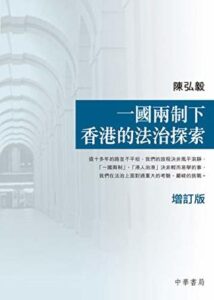 In 1997, the sovereignty of Hong Kong was transferred back to China. Despite the political triumph that the Chinese government has good reasons to celebrate, it has to cope with the challenges that come along with the reclamation of this ceded territory. It is an unprecedented experiment in the history of the People’s Republic of China (PRC), and perhaps that of any communist regime, to accommodate an autonomous jurisdiction within the state. With the creation of the Court of Final Appeal, it is equally unprecedented to empower Hong Kong people with final adjudication. At the same time, however, people in Hong Kong are faced with a puzzle for which there is no past precedent: the Beijing government is highly centralized and arguably autocratic, but the Government of Hong Kong Special Administrative Region (HKSAR) represents a community that treasures the substantial political freedom it enjoys and is determined to strive for full democracy. The “One Country Two Systems” (OCTS) arrangement is a preliminary answer to these questions, and is institutionalized by the Basic Law of HKSAR, a quasi-constitutional document that bears the hopes for Hong Kong’s political future.

Albert Chen Hung-Yee is no doubt a perfect insider to tell the story of the Basic Law. He is currently the Chan Professor in Constitutional Law in the Department of Law at the University of Hong Kong, a member of the Commission for Strategic Development of the HKSAR Government, and a member of the Committee for the Basic Law of the HKSAR under the Standing Committee of the National People’s Congress (SCNPC) of China. In his new work Yiguo Liangzhi xia Xianggang de Fazhi Tansuo (The Quest for Rule of Law in Hong Kong under One Country Two Systems), he provides learned reflections on the practice of OCTS since the handover fifteen years ago, accompanied by an insightful and in-depth evaluation.

Chen draws our attention to the Basic Law, and points out that the success or failure of OCTS is largely determined by the performance of the constitutional arrangements established in this legal document. The Basic Law includes provisions about rule of law, constitutionalism, human rights, autonomy and democracy—the values that are supposed to sustain HKSAR’s future (p.ix). At the same time, however, he makes clear that Hong Kong is not intrinsically entitled to SAR status. The autonomous powers of Hong Kong are authorized through the Basic Law in accordance with the PRC Constitution—the ultimate legal and political ground for Hong Kong’s autonomy. (p.16) He recognizes that the SCNPC has the power of interpreting the Basic Law at any time it sees appropriate, even without any application from Hong Kong courts. This is no violation of Hong Kong’s autonomy, but rather a product of the new constitutional order. (p.80) The powers of the Central Government are the setting for Hong Kong’s rule of law, and some constitutional conventions can well be expected to develop after years of practice which would de facto limit SCNPC’s power and make the interpretations predictable. (p.208) In this book, from a neutral and jurisprudence perspective, Chen has commented on a series of leading cases where Basic Law provisions are at issue, including the Ng Ka Ling case[i], Chong Fung Yuen case[ii], Flag case[iii], Secretary for Justice & Others v Chan Wah & Others[iv], and Equal Opportunities Commission v Director of Education[v], and concludes that the legal system for protecting human rights in HKSAR has been clarified and consolidated. The Basic Law has been “judicialized” and Hong Kong courts have played an important and trusted role in local public affairs. (p.76) On the whole, in Chen’s eyes, the OCTS practice under the Basic Law has been a success. (pp.88-89)

It is further significant to note that Chen has a vision for rule of law beyond Hong Kong, to include all of China. Constitutionalism, he argues, while having originated within Western civilization, applies universally, just like science. (p.95) The Basic Law, which incorporates the values of rule of law, human rights, autonomy and democracy, is a landmark document in China’s constitutional history. (p.ix) The Hong Kong story is a precious resource and lesson for China’s modernization (p.139). The Hong Kong courts have been playing an outstanding role in resolving public disputes and pushing for social reforms, which can inspire the mainland’s judicial reforms. (p.76) We have reasons to expect that Chen is correct on this point, and that the mainland Chinese legal system will reform towards rule of law with reference to the Hong Kong experience.