The Institutional Logic of Governance in China: An Organizational Approach 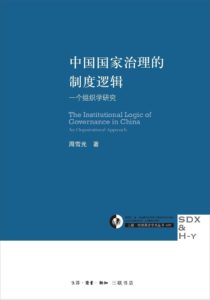 Why could China maintain a unitary empire/state for thousands of years? Why did China suffer long-term stagnation in history when compared with western civilization? How, all of a sudden, did China achieve such a developmental miracle within recent decades? These puzzles drive scholars from different disciplines to study Chinese history, politics, economy, etc. Professor Zhou’s book, with its persuasive and sharp analytical perspective, rich data and deep historical understanding, is a must read for anyone who is interested in Chinese politics.

In order to answer these puzzles, Zhou tries to figure out if there is a stable institutional logic of governance in China from the perspective of organizational theory. He identifies the basic, inherent, and persistent tension of Chinese governance: the great unity (stable and supreme centralization of authority) maintained through Chinese bureaucracy and the idea system of unification, and good governance which demands autonomous and efficient local authorities under a massive state scope (P.10). The more centralized the supreme authority became, the less autonomous and efficient the local government tended to be. He unpacks the tension through two main lines—the central-local and the state-society relationship—by focusing on first the institutional analysis of the general logic of governance, then the reactive micro-behaviors of local governments, and last the societal side of China and its interactions with the state and local governments. Inspired by Weber, Zhou traces how China turns from an Emperor bureaucracy (patrimonial bureaucracy) to a modern state with a mixture of state charismatic authority and bureaucratic rational-legal authority. What remains the same is that Chinese bureaucracy is subject to the Emperor and now the state’s power. It relies on authorization from the supreme authority, a charismatic authority traditionally attributed to the Chinese Emperors (Son of Heaven) and now transferred to the ruling Chinese Communist Party (p.80; p.139-144). Until now, the central government tended to monopolize the personnel system and incentive design to control the local governments (p. 22). The state could intervene with supreme and arbitrary power while it also relied heavily on well-functioning bureaucracy at all levels (ch.2).

This tension generates three different mechanisms of governance: ritualization of political education (p.34-37), uniformity in policy making and flexibility in implementation (ch.3) and campaign-style governance (ch.4). Zhou proposes a theoretical model based on the allocation and separation of control rights (goal setting, inspection and incentive provision) to analyze the authority relationships and modes of governance in the three-level Chinese bureaucracy—central government (the principal), intermediate government (a supervisor) and the local government (the agent) (ch.3). Given the scope of the state, it is inevitable to separate control rights among different levels of government as a compromise to make local policy implementation flexible and practical. The Chinese bureaucracy thus works as follows: the central government sets up goals and targets in specific areas and then subcontracts to the intermediate government, which has the right of incentive provision and actual organization of implementation, while the central government maintains the right of periodic inspection to review and evaluate the outcomes. Since the superior authority could cast arbitrary power to its subordinates despite the official rules and legal-rational logic of bureaucracy, Chinese bureaucrats tend to develop informal personal relationships with their superiors to seek protection and promotion while at the same time focusing more on passively avoiding misbehavior (p.135-6). The state thus employs a campaign-style governance to overcome setbacks and failures of the routine power of bureaucracy, which always requires intensive mobilization of resources and attention, therefore campaigns are always partial, selective and temporary (ch.4). The general institutional logic along with the three mechanisms help us to understand the four main micro-behaviors of local governments that Zhou specifies: bargaining within governments (ch.5), collusion among local governments (ch.6), muddling through in Bureaucracy (ch.7), and inverted soft budget constraint (ch.8). Zhou emphasizes on the rationale, inevitability and actual functions of those traditionally perceived as “misconducts” of Chinese local governments. In the last part, from the perspective of state-social relationship, Zhou supplies the micro-interactions between society (villagers) and state (local governments included) through three scenarios observed by rigorous and long-term field work: supply of public goods (building village roads) (ch.9), village elections (ch.10) and collective action/inaction based on unorganized interests (ch.11). Within each case, he not only provides rich details and traces processes, but also makes sense of them through explaining the institutional logic behind them.

In all, Zhou manages to provide both a structural perspective (tension between great unity and good governance), several middle level theoretical models, and rich detailed data and stories in order to manifest the institutional logic of governance in China. It would be better if the book could elaborate more on the efforts of establishing, maintaining and enhancing a unification centered shared value system that he summarizes as “ritualization of political education” in the beginning of the book. Meanwhile, his observation of “village elections” tends to be too optimistic when compared to the actual nationwide status quo. The tension between “stability overrides everything” and “development is the absolute principle” remains constant. Supreme and arbitrary central authority and a unification idea system in fact impede the professional development of Chinese bureaucracy, resulting in large-scale corruption of bureaucrats and conflicts within different levels of government as well as between citizens and the state. Zhou suggests that we need to bring the Chinese society side back into negotiation and cooperation with governments, reducing the ruling arbitrariness and the scope of the central authority. China is now in the process of finding new forms of domination and legitimacy, after all, it is in line with the fundamental interests of both the Chinese government and the people to achieve the rule of law.