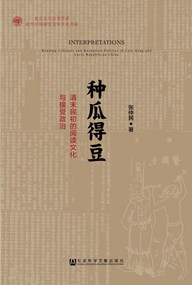 Recently, the study of new terms and concepts in modern China has started to become increasingly popular amongst Chinese historians. With a focus on the advent of key political concepts and terminologies for new disciplines, scholars are proposing a new research area called “conceptual history.” This new research area illustrates the etymology of such terms and how their change in meaning fosters crucial aspects in the modern transformation of Chinese state, society, and cultural values. However, given scholars’ special attention to the intellectual interpretation and representation of such new terms, the ways in which the general public read, accept and use them, have largely been overlooked.

Therefore, Zhang Zhongmin’s new book is a bold attempt in this area by shifting attention to the reception and adaptation of new concepts in the late Qing and early Republican periods. The author concentrates on production and transmission of knowledge, scrutinizing the introduction of several key concepts and ideas associated with modernity from Europe as well as Japan, and how they were materialized, localized, and symbolized in the endeavors of the public media and reformed-minded intellectuals.

The book consists of six chapters, excluding the introduction and conclusion, with each chapter pertaining to a specific case. The first two chapters discuss literary culture in the late Qing, with an emphasis on the readers’ reaction to new genres. In the first chapter, the author explores the endeavors of several reformed-minded intellectuals with ideals of enlightening the Chinese population, who strove to foster a new taste among the reading public in the late Qing period by spreading new notions like nation and civilization. Novels and dramas were among the most favored carriers, as intellectuals assumed that the most popular texts would attract the broadest readership. However, contrary to expectations, intellectuals found themselves unable to control the reception of such works amongst the general public and how readers’ reinterpretations always went against their initial purpose.

The next two chapters focus on the social representation of two western celebrities in the late Qing and early Republican China. In chapter 3, Zhang draws on articles published in newspapers, western history books, biographic dictionaries, and learning cases to explore the translation, recommendation, and acceptance of Hegelian Philosophy in the late Qing period. Through the case study of Zhang Taiyan’s explanation and criticism of Hegelian philosophy, Zhang Zhongmin analyzes the ways in which Hegelian philosophy was used as an intellectual resource, and the significance of such usage within intellectual history. In this chapter, Zhang investigates how Hegelian philosophy was used as an intellectual resource for the construction of China’s own intellectual history.

Chapter 4 examines the ways in which Gutenberg printing technology was used, represented and constructed in the historical writing of modern Chinese scholars. By inquiring into China’s contribution to the globalization of printing technology, Gutenberg was used as a symbol for printing capitalism and modernity, which, in the minds of modern intellectuals, China should pursue.

Chapter 5 traces the reception process of Esperanto. After Esperanto was introduced to China in the late Qing, many intellectual elites devoted themselves to advocating this new language. The advocates tended to idealize Esperanto while neglecting its deficiencies. Liu Shipei (劉師培 1884-1919), an anarchist, argued that Esperanto was a shortcut for Chinese to learn from the West and to integrate into the world, through which the ideals of modernization, civilization and world harmony could be achieved.

Based on the former discussions, Chapter 6 further explores the spatialization and localization of “new knowledge” in modern times. By focusing on the activities of Hunan intellectual Shu Xincheng (舒新城 1893-1960), this chapter discusses how the May Fourth and New Culture movements spread from central cities to inland localities, and how intellectuals responded and made choices in the face of such significant transformations.

The most challenging aspect of conducting research on history books and reading in China is that the historical materials are scattered. One of the major contributions of this book lies in its synthesizing a number of “uncommon” materials in the discussion of readership in the late Qing and early Republican period. For example, in chapter 1, Zhang uses numerous reviews published in newspapers which appealed for the revision of novels and dramas in the late Qing. In doing so, he attempts to expand the reception of such subjects from elites to common people. However, it seems ironic that the actual reception of these new terms amongst the common folks often deviated from the initial goals set by elites, as indicated in the title of this book “Sow One Thing and Reap Another.”

Yet, Zhang’s book also has its shortcomings. The author ultimately fails to provide much of the context in which to place the materials that the book focuses on. For example, in chapter 2 “the social life of pornographic books,” Zhang does not explain why he divides the reaction of readers into three sections, what the intended internal logic between these sections is, and how they relate to each other. This may cause confusion amongst readers as they cannot easily understand the logic that the author employs.