“Invasion” or “Liberation”?: Contested Commemoration in Cambodia and within ASEAN 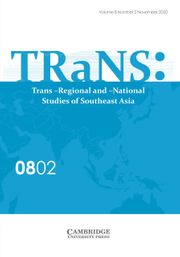 Abstract: This article examines the meaning of Vietnam’s removal of the Khmer Rouge in January 1979—an event that recently became a point of contention between the Prime Minister of Cambodia Hun Sen and Prime Minister of Singapore Lee Hsien Loong. Since 1980, Vietnam’s removal of the Khmer Rouge has been adopted as Liberation Day by the Cambodian ruling political party. The article discusses three topics: (1) the Vietnamese presence in Cambodia during the 1980s and the resulting civil war, (2) three major changes in the Liberation Day narratives, and (3) reflections on Hun Sen and Lee’s recent debate. It demonstrates that Hun Sen and Lee’s contention reflects on how the legacy of Vietnam’s removal of the Khmer Rouge has continued to be very important and sensitive in Cambodia and within the ASEAN Community today. It also examines China’s successful approach to strengthening its relationship with Cambodia after more than a decade of the political confrontation and hatred during the 1980s.