Islam in Dialogue with Chinese Civilization: Intellectual Activities of Chinese Muslims during the 17th-19th Centuries 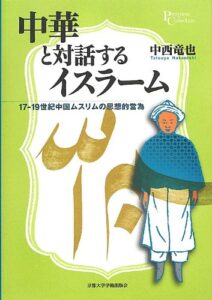 Reviewed by Noriko Unno-Yamazaki (Ph.D. Candidate, The University of Tokyo)

This award-winning book illuminates the historical development of what the author calls “Chinese Islam“ (中国的イスラーム) with a focus on how Chinese Muslim intellectuals struggled to maintain their religious beliefs in China and coexist with non-Muslims throughout the 17th-19th centuries. Through a close and critical analysis of diverse sources written in multiple languages, such as Chinese, Arabic and Persian, the author succeeds in depicting how Muslims attempted to harmonize Islamic teachings and traditional Chinese philosophy while having a realistic attitude towards social problems they were facing.

One of the most attractive points of this book is its wide coverage of a variety of topics, regions, times and people, including an abundance of examples in order to illustrate how Islam became “Sinicized” (中国化): the translation process of Islamic teachings into Chinese, Sufism in Northwest China, interpretation of Islamic laws by Yunnan Muslims, the usage of Persian language in Chinese Muslim communities, and so forth. The tables in several chapters help readers understand the highlights of Islamic history in China. However, such a vast amount of information also makes the book disconnected and rambling. It would have been better had the author explained in more detail how each chapter could be connected and integrated. This can be counted as the first problem of this book.

Second, the meaning of the word “dialogue” in the title is ambiguous and even misleading. To be sure, Chinese Muslim intellectuals did integrate Islamic philosophy with Chinese philosophy, but the author does not fully clarify whether Chinese Islam influenced non-Islamic Chinese philosophy or non-Chinese Islamic philosophy. Hence, it is questionable to call the self-enclosed intellectual activities of Chinese Muslims a “dialogue among civilizations.” Rather, they were more a “monologue” for “cross-civilizational mediation.” Third, the author did not clearly define what “Chinese Civilization” and “Sinicization” actually mean.

Still, this is an extremely valuable and must-read book as one of the most systematic studies of the intellectual history of Chinese Muslims from a broad perspective and with a keen awareness of key problems. As one prize committee member remarked, when it was awarded the 35th Suntory Prize for Social Sciences and Humanities in 2013, this book will be widely read for at least the next two hundred years.