The “Islamic Movement” in Contemporary China: An Ethnography of Hui People Living in Difficulty 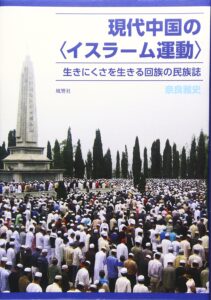 No matter whether their subject is Christianity, Judaism, Islam, or Buddhism, one of the most common problems with books about religion is that scholars’ romanticized notions of piety result in misguided quests for all-too-perfect religious beliefs.

In his award-winning book, up-and-coming Japanese scholar Masashi Nara has conducted anthropological research on Muslims in contemporary China—particularly on the Hui people (or Huizu 回族) in urban areas of Yunnan Province—that questions such tendencies while at the same time delivering fresh insights into religious anthropology. He illuminates the lives of the Hui and the contradictions in the practices he sees, challenging the naïve dichotomies of “Islamic/un-Islamic” or “religious/secular” that continue to drive studies of Muslim minorities living in non-Muslim regions.

By carefully analyzing the development of what the author calls the “Islamic movement” in Yunnan—a relationship with Islam that cannot necessarily be reduced to pious faith—the author succeeds in elucidating how the Hui negotiate their inner faith and the real-world problems they encounter living under the religious restrictions of the Chinese government, and surrounded by non-Muslims such as the Han and other ethnic groups of the region. The “Islamic movement” analyzed here comprises the da‘wah (preaching Islam) movements, education, online communities, as well as marriage among Muslims (and sometimes with non-Muslims, such as the Han people), made popular as one aspect of the so-called “religious revival” in China after the end of the Cultural Revolution. However, as noted above, these are not always conducted for the religious reasons we imagine. Nara emphasizes that the “Islamic movements” of his subjects should be understood as an amalgam of religious, political, social, ethnic, and cultural acts that reflect their efforts to change themselves in response to the dynamic political and social situation they face in their daily lives.

The Muslims presented in this book differ from those found in media stereotypes. For example, the author spotlights Muslims who miss prayers and are still distressed that they are not devoted Muslims. Others search for marriage partners the way non-Muslims do. Non-Muslim readers will feel closer to such Muslims after reading this book and gain new perspectives on Islam and Muslims, while Muslim audiences will bear witness to previously unknown realities about Islam in China. As the author states at the beginning of the book, his work aims to help readers deepen their understanding of the everyday lives of Muslims and the current situation of religious activities in China. Part of what makes this work so ambitious is that it asks us to think through the complicated realities of everyday life among Muslim communities in contemporary China.

Another important contribution of this study is that it demonstrates the fluidity and ambiguity of the definition of the Hui and of the boundary between the Hui and Han peoples. Indeed, it reveals that Muslims in contemporary Yunnan regard the Hui as an ethnic category and distinguish it from Muslims, which they recognize as a religious category. Interestingly, contrary to the common sense in China that the Hui people are Muslims, the subjects of this book prefer to position themselves as Muslims, while they use the term Hui in the context of denial. Nara also asserts that there is a tendency that Han converts to Islam are highly evaluated as more devoted Muslims than are Hui Muslims, often regarded as “inborn” Muslims, who are said to be the descendants of Arab, Persian, and Turkic Muslims who had settled down in China and historically assimilated in Chinese society. This discovery asks us to reconsider how we might understand the complicated relation between ethnicity and religion in general.

Nevertheless, although Nara supplies a solid and in-depth analysis of various aspects of religious activities among the Hui people in present-day Yunnan, his study contains a serious omission. In his surveys of the conception and definition of Han, the author did not adequately explore previous scholarship on how the term had been invented and used throughout history—both by those who regard themselves as Han Chinese and by those who claim to be non-Han, despite the depth that such studies would have provided his investigation. This makes the book’s discussions of the ethnic and religious boundaries between the Hui and Han vague and unsatisfactory because they replicate, without crediting, the findings of previous authors and fail to make use of helpful analytical language or paradigms.

Still, Nara’s monograph offers one of the best studies of the Islamic activities of the Hui people in contemporary China. Moreover, Nara’s insights into Muslim society in Yunnan are a valuable contribution not only to the academic field, but to a general audience as well. Sadly enough, prejudices against Islam persist today. This book should be widely read as a fresh and welcome perspective on Islam and Muslims.