Just a Song: Chinese Lyrics from the Eleventh and Early Twelfth Centuries 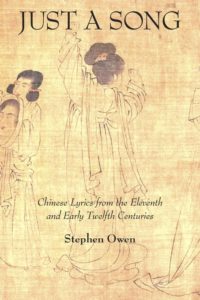 About the book: “Song Lyric,” ci, remains one of the most loved forms of Chinese poetry. From the early eleventh century through the first quarter of the twelfth century, song lyric evolved from an impromptu contribution in a performance practice to a full literary genre, in which the text might be read more often than performed. Young women singers, either indentured or private entrepreneurs, were at the heart of song practice throughout the period; the authors of the lyrics were notionally mostly male. A strange gender dynamic arose, in which men often wrote in the voice of a woman and her imagined feelings, then appropriated that sensibility for themselves.

As an essential part of becoming literature, a history was constructed for the new genre. At the same time the genre claimed a new set of aesthetic values to radically distinguish it from older “Classical Poetry,” shi. In a world that was either pragmatic or moralizing (or both), song lyric was a discourse of sensibility, which literally gave a beautiful voice to everything that seemed increasingly to be disappearing in the new Song dynasty world of righteousness and public advancement.