Language and cultures in Ryukyu Islands 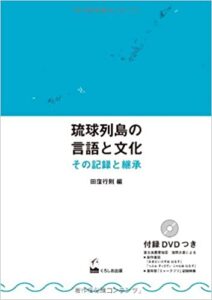 This book consists of articles which introduce ongoing research attempting to document and preserve endangered languages and cultures in Ryukyu 琉球 communities.

Located to the southwest of Japan, “Ryukyu” was a kingdom ruling over a group of islands in this area from 1429 to 1872. Because of the geographical isolation and distinctive historical evolution, communities on the islands have maintained unique languages and cultures which are different from the rest of Japan. However, the adaptation of mainstream Japanese culture and the enforcement of Japanese governmental policy threaten long-existing languages and traditional cultures. According to the UNESCO’s Atlas of the World’s Languages in Danger in 2009, all the Ryukyu languages (or dialects) are listed among those facing risk of extinction.

There have been some initial local efforts to preserve Ryukyu languages and cultures. Adding to this, in the 2000s some scholars introduced two new approaches to those efforts.. The first approach involves what they call descriptive linguistics, which is used to describe a comprehensive grammar of languages. The second one is termed documentary linguistics, employed to record and film a wide range of linguistic practices, including traditional ceremonies, songs and folktales. Yukinori Takubo is an outstanding scholar who has published about these two approaches.

Takubo, the editor, divides the book into three parts. The first discusses why conducting research on the Ryukyu languages is so important and how we can document and revitalize them. The following part illustrates the language status of several Ryukyu languages and, at the same time, examines the causes of their decline. This section also includes observations of changes in traditional ceremonial practices.. The last part provides some grammar sketches and texts accompanied by grammatical annotation. The book comes with a DVD containing documentaries about a local traditional ceremony and newly invented fairytales for promoting the use of the traditional language in a new domain in Miyako[1].

I appreciate three aspects of the book. First, the book introduces the most up-to-date academic studies of the Ryukyu languages. This is significant for those with interests related to endangered languages. The book is also essential for readers who are working specifically on historical linguistics in Japanese and linguistic typology. Secondly, it incorporates useful methodologies for describing grammar, making documentations, and evaluating language status. Lastly, the book can be regarded as an important source for primary data like films and corpus of texts and grammar sketches significant for language revitalization.

However, it appears to me that this edited volume devotes inordinate detail to specific parts of the islands. Though its title nominally encompasses the entire Ryukyu Islands, most of the book focuses on the Southern Ryukyu languages while only two grammar sketches are devoted to their Northern Ryukyuan counterparts. Moreover, this book is for professional readers who have some background in the field of Ryukyu language studies. Non-professional readers may not be able to grasp the larger linguistic implications.

Nevertheless, the documentation of endangered Ryukyu languages is an urgent and vital task and for this reason this volume is a wonderful achievement. I am sure that this work will inspire many current and future researchers.

[1] Miyako is an island located in southern part of the Ryukyu Island group.