Let’s Read Kaebyŏk in its entirety 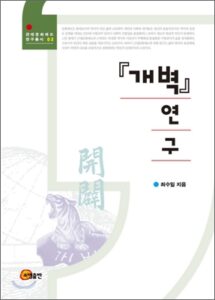 “Kaebyŏk” yŏn’gu is a series of research on the modern cultural system of Korea, and is a compilation of the author’s previous research on the magazine Kaebyŏk over the past decade. Kaebyŏk was first released in June 1920 and was forced to close in 1926. It was considered the “media center” and a “hero of the times” in the 1920s (p.13).[1] However, Kaebyŏk itself was treated as a ‘bowl’ rather than a research subject. In other words, it was regarded as a method for other studies. Therefore, the author confesses his intent for a comprehensive study of Kaebyŏk and suggests three ways in which to reach it. The first is to read the book in its entirety, and the second is an empirical and inductive research method of “letting the material speak for itself” rather than using Kaebyŏk as a source through which to study another subject, as it is most commonly used for.  The third is through a method of research in which the reader examines Kaebyŏk throughout multiple time periods, taking into consideration the state of society before and after its issues were published. When we follow the author’s voice in these three ways, we can get closer to Kaebyŏk itself.

This book largely covers four issues. First, it looks at the dynamics of the colonial system as a media environment where Kaebyŏk was a form of expression, focusing on ‘the question of censorship.’ Kaebyŏk was subject to the “Newspaper Act,” and was eventually banned over 40 times. They used to say that it was “not surprising that it happened once every three months (pp. 33-34).” It is easy to imagine that the Japanese imperialists oppressed the publishers in order to distort the flow of modern literary history according to their intentions, and that the author interprets the result of such oppression as proof of the spirit of Kaebyŏk. Despite economic losses, Kaebyŏk continued its national movement in violation of the provisions of the Newspaper Act. Second, the author clarifies the publishing structure of Kaebyŏk, showing how it became a ‘cultural power’ of the era that helped carry the sentiment of the time. Kaebyŏk adopted a modern type of publishing, in which publishing offices and sales offices were separated, with various offices and branches run by a mix of youth and social organizations. This led to the opening of Kaebyŏk as a powerful medium for the nationalist movement. In addition, Kaebyŏk could lead the spirit of the time with their core readership which was mostly comprised of intellectuals, merchants, and young people. Third, the author analyzes the ideological flow of Kaebyŏk, illuminating the appearance of modernity and the magazine’s media prospects. The popularity of Kaebyŏk cannot be explained simply by its modernized distribution system. As a comprehensive paper, the ‘diversity’ of Kaebyŏk satisfied the intellectual desires of young people and students. Also, Kaebyŏk could achieve ‘popularity’ by actively accepting correspondence columns. Kaebyŏk was widely open to ideas. The author explains that the conversion of ideas from Kaebyŏk ideology to reconstructionism, and then to socialism, has meaning as a “literary struggle and prehistory of literary struggle in the second half of bourgeois literature and professional literature” (p.485). Fourth, the author examines the influence of Kaebyŏk on literary history. The problems of censorship, distribution, and ideas discussed above were all linked to that of literature, which Kaebyŏk led the popularization of, and eventually it was naturally linked to “New tendency literature.”

The author of this book investigated original documents to reveal the extent of censorship throughout Kaebyŏk’s existence, and presents the number of articles seized or deleted through a comparison of the manuscripts with the originals. In addition to this, the author has included various lists, statistical tables, photographs, and indexes, obtained from researching Kaebyŏk, as pictorials and appendices in the book. Hur (2009) admired, within his book review on “Kaebyŏk” yŏn’gu, the author’s affection for Kaebyŏk but also pointed out that “if you only focus on Kaebyŏk by itself, you cannot really analyze Kaebyŏk” (p.452). My hope is that studies on Kaebyŏk beyond this demonstration will be made in the future based on the study of this book, “Kaebyŏk” yŏn’gu.