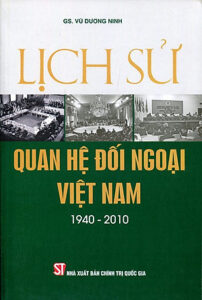 Written by an experienced Vietnamese scholar, this book examines the evolution of Vietnam’s foreign policy and relations through different periods from 1940 to 2010 corresponding to changes in international context and developments in the country’s internal conditions. Besides an introductory chapter and conclusion, the book is presented in chronological order including seven other chapters. The book is informative, clearly written, and understandable.

What stands out in this 364-page historical book is that it provides not only comprehensive information on how Vietnam’s foreign policy decisions are made, but also a systematic overview of Vietnam’s relations with major powers, neighboring countries in Southeast Asia (SEA) followed by a detailed description of important multilateral, trilateral, bilateral relationships. Based on mostly secondary and some primary sources in Vietnamese, English, and French, the author successfully analyzes the major shifts in Vietnam’s foreign policy and domestic decisions from the 1940s to 2010. It concludes with an assessment of the historical diplomatic lessons and experiences during 70 years of history. In addition, the book contributes to multiple fields. The most explicit contribution is to the field of International Relations (IR) history, with an emphasis on Vietnamese history. The book is part of orthodox history of Vietnam that examines the relations between world history and SEA history, especially in Vietnamese-language scholarship. The Vietnamese sources importantly lead to a better understanding from Vietnam contexts and perspectives. Furthermore, the book also contributes to the field of Cold War history, political science (foreign policy analysis), and Vietnamese studies.

Yet, the book does have a few shortcomings, which can be classified as calls for further research than drawbacks. First, there remains considerable room for incorporating scholarship by uncovering primary documents within the Vietnamese National Archives. However, it is understandable that the author was unable to “directly access primary data” (p.19) as the book was finalized in 2010, one year before the promulgation of the Law on Archives which benefits scholars by allowing increased access to the Vietnamese archives on top-secret and secret Vietnamese documents. Second, in some respects, the book is not up-to-date regarding recent world history scholarship as 2010 is the latest year recorded.

Taken together, it is an essential reading for scholars and graduate students who are doing research on a similar topic or are interested in Vietnamese studies, IR history, SEA studies, and Cold War history.