Life after Fukushima: Reflections on the Aftermath of 3.11 in terms of History, Philosophy, and Art 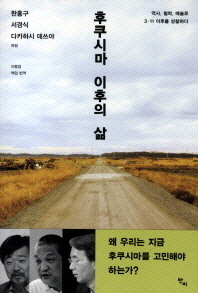 This book is a record of discussions among three scholars who are not specialists on nuclear issues, but who are critically aware of the seriousness of the Fukushima disaster. One of the remarkable features of this book is that the three authors have different backgrounds: Hong-Gu Han is a Korean historian, Tetsuya Takahashi is a Japanese scholar of philosophy, and Gyeong-Sik Seo is a Zainichi (ethnically Korean in Japan) scholar on art. As the subtitle of this book indicates, these three specialists on history, philosophy, and art discuss the aftermath of the 3.11 disaster, which happened in East Japan on March 11th, 2011. They met for five rounds of discussions in Fukushima, Hapcheon, Tokyo, Jeju, and Okinawa, over the course of a year from November 2011 to December 2012.

As one of the authors, Gyeong-Sik Seo, emphasizes, these five venues of discussion have their own special histories and the three scholars chose to go there in order to experience ‘the power of the place.’ Fukushima, the first venue, became well-known as a symbol of the nuclear problem after 3.11 disaster. Hapcheon, located in southeast Korea is known as the ‘Hiroshima in Korea’, since many Korean victims of the Hiroshima atomic bomb were from this region and some still live there today. Tetsuya Takahashi argues that these two cases of Fukushima and Hapcheon, both related to nuclear problems, show that the nation-state has deceived and abandoned its people—especially, the nation-state ignores minorities who are not nationals of that nation. According to Takahashi, the so-called ‘system of sacrifice’—whereby the nation-state must be supported by some people’s sacrifice—is a marked feature of a nation-state, whether it has nuclear weapons or nuclear power.

The discussions in Tokyo, Jeju and Okinawa move back and forth between the past and the present, discussing historical issues related to these places. The authors point out that the Korean peninsula and Okinawa share experiences of Japanese imperialism and colonialism, in addition to experiences of having been forced to carry nuclear weapons under American imperialism in the post-war period. According to their discussions, the two cases of Jeju and Okinawa are representative of the system of sacrifice: Jeju Gangjeong is struggling against Korean government efforts to establish a Korean naval base in that village. Similarly, Okinawa has been struggling against US military bases.

This book fruitfully brings together the different perspectives of the three authors. It also demonstrates how the five localities can be linked in the context of the difficult histories in East Asia. For example, crossing Japan and Korea, Gyeong-Sik Seo makes a connection between the ‘Jeju April 3rd Massacre’ and the ‘Alien Registration Law’ in Japan in 1947. He points out that these two occurred in the same year of 1947, and he argues that this is by no means a coincidence. Many Koreans left Jeju for Japan to avoid the April 3rd Massacre, and the Alien Registration law was used as a legal basis for arresting many of them once they got to Japan. According to the author, this means that during the occupation period after the Japanese empire’s collapse, Japan participated in American policies on Korea. This case is one of their examples to demonstrate how Korea, Japan and the U.S. in the initial post-war years were linked to one another just following the end of the Asia-Pacific War. The authors strive to examine the dynamics of inter- connectedness in history with critical lenses.

In addition, the case of Jeju raises the crucial issue of double-minorities: Zainichi Koreans in Japan who are originally from Jeju. Just after the March 11th disaster in Japan, some Japanese started an anti-Korean movement in Tokyo and the movement then spread to other places in Japan. This phenomenon can be interpreted not only in the context of recent developments in the diplomatic relationship between Korea and Japan, but it is also reminiscent of the Korean Massacre in the aftermath of the Great Kanto Earthquake in 1923. The current anti-Korean movement appears to continue along the lines of Japanese imperialism, with Zainichi Koreans in Japan being the main victims. How the authors see and situate this phenomenon—anti-Korean movements rapidly on the rise after the 3.11 disaster—along the lines of history remains a question in this book.