Making Audiences: A Social History of Japanese Cinema and Media 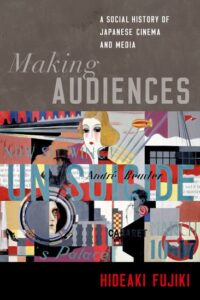 About the book: Film has always been a key technology for producing and disseminating attachments to ‘the social.’ Making Audiences explores the century-old relationships between Japanese media and social subjects, analyzing the connections between cinema audiences and five significant discursive terms: minshu (the people), kokumin (the national populace), toa minzoku (the East Asian race), taishu (the masses), and shimin (citizens). Fujiki narrates the history of Japan’s transmedia ecology, illuminating cinema’s enmeshment with other forms of media, from vaudeville to the internet, so that cinema audiences emerge as simultaneously shaped by and shaping social history. His extensive empirical research and commitment to interdisciplinarity bring new perspective to the history of Japanese society and culture in its global context from the early twentieth century up to the beginning of the twenty-first century, setting his insights within the context of total wars, imperialism, gender, ethnicity, mass society and communication, the ethics of care, citizenship, globalization, neoliberalism, social movements, digital media, and public and intimate spheres. By reorganizing the study of film and its audiences as central players of the history and politics of the 20th century, Fujiki writes the history of Japan and East Asia anew.

About the author: Fujiki Hideaki was a HYI Visiting Scholar from 2006-07.