The Market and Politics: Lifting the Veil on Chinese Private Entrepreneurs 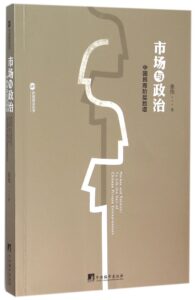 Reviewed by Huang Jie (The University of Hong Kong)

Owning enormous economic resources, private entrepreneurs are perhaps “the most studied of any in reform era.” (Teresa Wright, 2010: 37) Over the past decade, there have been many influential studies on such groups in Western academic circles. Some of them, such as Margaret Pearson’s (1997), Bruce Dickson’s (2003), and Kellee Tsai’s (2007), have become must-read books for students of Chinese politics. However, few endeavors are from native Chinese scholars. This book, written by Zhang Wei, a young political scientist of the Central Party School of the Chinese Communist Party, is an exception.

Drawing upon his intense interviews with 63 private business owners as well as a large-scale survey, Zhang provides a detailed account of Chinese private business owners and their complex relations with the Party-state. The main findings of the book can be roughly summarized as follows: (1) despite having great economic influence, Chinese newly emergent capitalists are weak in politics. They have various occupational backgrounds and distinctive social and political identities, which shape their interactions with the government when pursuing their interests. Moreover, they lack autonomous association systems to coordinate their actions. Most business associations, initiated and supervised by the state, do not allow their members to coordinate independently. (2) Benefiting from the ongoing economic reforms, Chinese private business owners have enough incentives to tolerate and even support the incumbent regime. Although having some grievances on specific economic and social issues—heavy taxation, financial control and environmental degradation— most Chinese private business owners believe that their material prosperity is due to the state’s economy-friendly policies and they are welcomed into the established political system. (3) Chinese private business owners are cautious in their interactions with official bureaucrats. On the one hand, as the Party-state still retains great influence in economic sectors, they have to establish and maintain good personal relations with officials to secure more state-controlled resources. On the other hand, they are clearly aware that their close links with specific officials will bring unexpected risks to their business. As indicated in many recent cases, the downfall of high-level cadres is always followed by the dramatic decline of their protégés’ business. Therefore, clever entrepreneurs tend to keep a close but ambiguous relationship with state officials.

This book contributes to our understanding of the political roles of China’s newly emergent capitalists. Contrary to the conventional wisdom of modernization theory, Zhang argues that China’s new business elites are neither inherently supportive of the Chinese Communist Party’s authoritarian rule nor against it. Like their counterparts in East Asia and Latin America, Chinese capitalists take a contingent stance toward the regime’s political liberalization. Only when their interests are directly threatened by the Party-state are they likely to demand dramatic political change. However, this is not the case for today’s China, where new economic elites have closely aligned their interests with the Party-state, at least for the time being.

Insightful as it is, this book suffers from a key structural problem. That is, the book lacks a good, comprehensive literature review. Indeed the author mentions some English studies, but most Western scholars’ more recent and important works are entirely ignored. For example, throughout this more-than-300-page book, the author never cites any of the three essential books mentioned in the beginning of this review. As a result, the reader can potentially miss the theoretical field where this study is located. Yet, as one of the most comprehensive studies on the topic by a native Chinese scholar, the book deserves careful reading by anyone who is interested in China’s private sector and its relations to the Chinese state.