Measures of Value in the Qing Dynasty: A Study on Parity Rate of Various Currencies 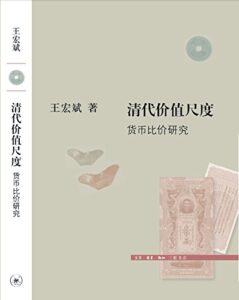 One of the most distinctive features of the Qing empire was the use of a two currency operation, silver and copper coins. This “dual monetary system” or “bimetalic currency system” is  based on uncoined silver specie and statutory coins (‘制錢’) made from copper alloy with the Qing regulations stating that one thousand copper cash carried a par value of one silver tael. This system, even with the Qing efforts to promote stability in the money market by maintaining the legal copper-to-silver exchange rate of 1,000:1, remained unstable for most of the period.

Most historians have attributed the dual monetary system instability to unstable silver supplies. Considering how the Qing were almost entirely dependent upon foreign silver imports to maintain the ratio between statutory coin and uncoined silver specie, as opposed to copper, this appears to be a plausible explanation for Qing financial instability. However, in his book, Measures of Value in the Qing Dynasty: A Study on Parity Rate of Various Currencies, Wang Hongbin challenges this notion.

Grounded in extensive data, Wang Hongbin explores currency price fluctuation during the Qing dynasty through a new perspective based on Marxist economics, the monetary theory from labour theory of value, to criticize ‘the quantity theory of money’ which existing studies have relied on. In the Qing Dynasty, Wang argues that the copper-to-silver exchange rate fluctuated not solely because of the silver supply but also due to the fluctuant prices of metals in the market (causing changes in the weight of statutory coin) and changes in societal conditions.

This book is composed of 15 chapters, apart from an Introduction and Conclusion as well as three appendices. From Chapter 1 to Chapter 11, divided according to the periodization of the trend in copper-to-silver exchange rate in the Qing dynasty, the author examines the main cause of the fluctuation in the price of silver. By comparative analysis of the trend in the price of metals in market and the price of rice to the trend in copper-to-silver exchange rate, Wang rebuts the existing view ascribing silver price fluctuations to changes in silver supply based on “the quantity theory of money”. In the remainder of the book (Chapter 12 to 15), the various responses of Qing officials and intellectuals to the fluctuation in copper-to-silver exchange rate are investigated. A lack of understanding of currency circulation, corruption, and ineffective government responses to the issue, Wang maintains, resulted in the Qing dynasty’s poor response to the issue of an unstable monetary system.

With a new theoretical viewpoint and grounded in statistical data, this book makes a contribution to views on the issue of the dual monetary system in the Qing dynasty. Yet, in some parts, the author unduly draws a theory to support his argument. For example, in Chapter 7, to emphasize the effect of demand for silver rather than supply of silver on the increase in silver price in the first half of the 19th century in the Qing dynasty, Wang depends on the theory that increasing demand for silver rather than copper as currency in accordance with the development of a commodity economy drives copper out of the monetary market. Leaving the validity of the theory aside, it seems disputable to apply the theory to society in the first half of the 19th century because the Qing dynasty was in the midst of a severe economic depression in the period, as existing studies point out.

This book, nonetheless, successfully presents a new perspective on the issue of a dual monetary system in the Qing dynasty based on economic theories with extensive statistical data. Wang’s enlightening work will be a must-read for those interested in the history of currency.