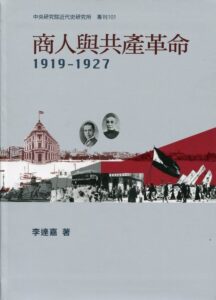 Reviewed by Huang Jie (The University of Hong Kong)

In the long period of time before the late Qing dynasty, merchants in China were discriminated against by official ideologies as a less respectable and trustworthy occupation than intellectuals and farmers. It was not until the late Qing that the status of merchants greatly increased, as the Manchurian rulers felt that a modern economy was vital to the maintenance of their rule in China—especially after several defeats by Western powers in the late 19th century. Since then, Chinese merchants were gradually integrated into social and political affairs and emerged as a key social force. This book, written by a Taiwan-based historian, examines the Chinese Communist Party’s relationship with merchants from 1919-1927, the period French historian Marie-Claire Bergère called “the golden age of the Chinese bourgeoisie.”

Drawing upon archival materials, the author provides a detailed and nuanced portrait of the newly-born Communists’ interactions with capitalists during some major historical events of the period such as the May Thirtieth Movement (1925), the Canton-Hong Kong strike (1925-1926), and the Shanghai Massacre (1927). Challenging the conventional wisdom that communists could not cooperate with capitalists due to their extreme anti-capitalism ideology, the author finds that capitalists actually played a crucial role in the Communists’ early revolutionary activities and that most of the time the newly-established Party strove to keep a cooperative relation with capitalists. This was especially true during the early revolutionary efforts of the Chinese Communist Party to mobilize the working class and organize strikes against the privileged presence of foreign imperial powers. In order to maintain large-scale strikes, such as the May Thirtieth Movement in Shanghai and subsequent strikes in Hong Kong and Canton, young Chinese Communists, who were underground organizers of these strikes, had no choice but to work with the capitalists in commercial ports, as they lacked the organizational, financial and social ability to independently lead the strikes. Therefore, the rational strategy of young Chinese Communists was to cooperate with “patriotic national capitalists,” who also suffered, to much less of an extent, from the dominance of foreign imperial powers in China.

As the author points out, despite having a clear anti-capitalist stance as prescribed by orthodox Marxism, the Chinese Communist Party could compromise its basic ideologies in practice even from its earliest years. Indeed, except for some periods before 1949, such as the Jiangxi Soviet, the Communist Party always adopted relatively pragmatic policies to tackle its relations with capitalists. This was particularly significant after its settlement in Yan’an in the late 1930s. The Party, led by Mao Zedong, put forward a series of friendly policies to encourage the development of private business in its jurisdictions and to unite with national capitalists in Kuomintang-ruled areas, first against Japanese military invasion and later against Chiang Kai-shek’s rule. This pragmatic tradition, though abandoned soon after the Communist Party’s coming to power in 1949, was restored after Mao’s death in 1976, which contributed to the economic success of the post-Mao era.

Although much scholarly attention has been paid to the Communist Party’s relationship with emergent capitalists in the reform era, few focus on this crucial relationship in the Party’s early years. This book, a result of the author’s decade-long efforts, provides a comprehensive and detailed analysis of this complex relationship. It deserves careful reading by all those interested in the Party’s early history and the evolving state-business relations of contemporary China.