The Military Establishment and the Integration of the People: From the Sino-Japanese War to the period of the Manchurian Incident 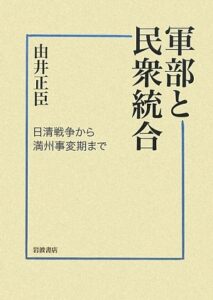 YUI Masaomi [1933-2008], Professor Emeritus at Waseda University, was a comprehensive historian of modern Japan. His works ranged from a trans-war history of 1940s to a study of the establishment of modern Japanese armed forces in the early Meiji period, to a biography of Tanaka Shojo. Moreover, he was an editor of the canonical 15-Volume Encyclopedia of National History [国史大辞典] throughout the 32 years of its publication. And in his youth, as a librarian at the National Diet Library, he collected and catalogued the TERAUCHI Masatake Papers and the SAITO Makoto Papers.

One of Yui’s main research topics was the political history of the military establishment. His posthumous book, The Military Establishment and the Integration of the People is a collection of essays originally published as articles which first appeared mainly in the 1970s. Although the author selected the six articles and organized the structure of the book immediately before his death, the final editorial work was left to one of his former students, UTSUMI Takashi.

The six essays, which are ordered chronologically, present vividly the emergence of Japanese militarism. By a painstaking analysis of primary sources, Yui shows how Japanese militarism developed, and gained significant power in the policy-making process from the period of the Sino-Japanese War to the Manchurian Incident. The author examines the military not as a state apparatus of war, but rather as a political agent of the state seeking the national integration of the people.

Although the independence of the supreme command and the right of direct appeal to the emperor institutionally guaranteed the privileged position of the military in Japanese politics, the power and privilege of the military were still determined in relation to other state apparatuses, such as the Cabinet and Privy Council. Yui demonstrates how the military establishment took advantage of opportunities produced by external crisis, such as the Russo-Japanese War, the 1911 Revolution in China, and World War I, to steadily strengthen its political influence by integrating the people through the National Legion and Youth Association. Although the Taisho Political Crisis of 1912 temporarily deterred the arbitrary intervention of the military into politics, Yui makes clear that in the post World War I period, the military establishment seized every opportunity to gain more power.

Although comprised of six separate essays, the book offers a consistent picture of the development of the military establishment as a vital political actor in prewar Japanese politics, and provides an essential prologue to the story of wartime Japanese militarism in the 1930s and early 1940s. Even though the essays were originally published several decades ago, they remain vital works for understanding the politico-military history of modern Japan. As military and political history have gone somewhat out of fashion, the freshness of Yui’s work will lead us to recognize again its importance and encourage historians to return to the subjects and approaches he helped to pioneer.

At the end of the book, the editor has appended an autobiographical sketch of the author. This postscript is itself very interesting, as a source for the study of postwar Japanese historiography. In also helps us to understand what motivated Yui to pursue the subject of Japanese militarism with such tenancy. As E.H. Carr said, “Before you study the history, study the historian.”