Modernity, Asia, and the Yangming School 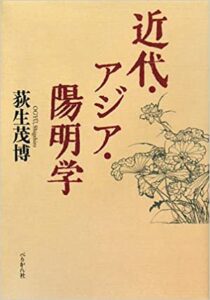 This collective treatise of Ogyû’s works makes us aware again that Japanese intellectual history must be considered not as a historical development peculiar to one nation, but in relation to the overall development of the East Asian intellectual world. For many years, Ogyû focused on the special role of the “Yômei-gaku” movement in modern East Asia. His argument shows that the narrative of “the collapse of Neo-Confucian thinking” was invented in late nineteenth century Japan as a “modern” understanding of “Yômei-gaku,” and then in the early twentieth century it was exported from Japan to China and Korea as a “modern narrative” of nationalism in East Asia. As the author Ogyû regrettably passed away in 2006 at age fifty one, his magisterial project on Modern “Yômei-gaku” ended, but we are now able to trace the development of his academic interests through his posthumously published book.