My Village, My Country 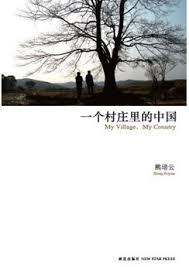 In 2001, Xiong Peiyun published an article about his hometown of Xiaobao, a remote village in Jiangxi Province. Based on his observations and life experiences, Xiong sketched a rough picture of the changes experienced by the villagers over the course of a decade. The article turned out to be a great success and drew a lot of attention from both domestic and foreign audiences.

Born and raised there, the author has a profound connection with this village, and was inspired by his enthusiasm and sense of responsibility to do something for it. Therefore, as a journalist and writer, he decided to write a book about the village. Ten years later, he published this book.

The book is made up of six chapters as well as an epilogue, focusing respectively on land and peasants; the construction practices of the rural area since 1930s; life and memory during the period of Japanese occupation; the inequality and gap between urban and rural areas; rural democracy; and leisure and spiritual life in the village.

The Chinese title “一个村庄里的中国”, which literally means “China in a Village” (though the author prefers to translate it as “My Village, My Country”), is quite ambitious. How can one small village represent the vastness and diversity of China?

The author’s solution lies in what he terms a “run-through” approach. In time, the book’s narrative “runs through” the author’s 30 years of experience since the 1970s as well as the rural construction practices over the past 100 years. In space, the author acts as the thread. Born and brought up in the village, the author went to the city for his education (one of the three main ways for peasants to get into the cities, the other two being enlistment and labor), and later went abroad. In the book, therefore, we can see not only Xiaobao village, but also its neighboring villages in Yongxiu County, Jiangxi Province and even the villages and cities of France. But what impressed me most is the third “run-through”—the connection between sense and sensibility. On one hand, the author conducted fieldwork, and also referenced many historical documents. Based on these data, the book discusses several theoretical issues, such as land and the peasantry and the origin of urban-rural inequality. On the other hand, he tells stories about ordinary people and expresses his affection towards the village. All of the issues and stories are recorded in a passionate way.

Take the land and peasants for example. In the history of China, all land belonged to the emperor, as “kings have long arms.” But following the land reform led by the CCP (Chinese Communist Party), land came to be owned by the peasants for the first time. However, that was not the end of the story. The subsequent collectivization of agriculture turned the land into collectively-owned property overnight. The promise of land-to-the-tillers was broken, and the peasants no longer owned land. Similarly, during the early years of the PRC, free migration was a right prescribed by the constitution. Yet all of a sudden, the policy of administering the cities and countryside separately erected a wall between the urban and rural areas. The so-called agricultural household registration bound peasants to the land for many years, and thus the land began to own the peasants. Through this narrative, we not only get to know why the land owns the peasants rather than the other way around, but also how the peasants suffered from this bait-and-switch trick.

Another case is the old tree in the village. It was sold at a low price and moved to some coastal city several years ago. But the tree was priceless in the eyes of the villagers and the author, not only because it provided shadow so that villagers could enjoy their leisure time, but also because it witnessed the history of the village and served as a kind of spiritual home.

The most painful part of this narrative lies not in the inequalities in income, medical care, education and employment between urban and rural residents, but rather in the fact that the peasants have no choices. They cannot migrate to the city freely; they cannot prevent their houses from being torn down; they cannot even decide the fate of an old tree. They are deprived of choice and opportunity because they are considered to be ignorant or of low quality. Thus they have to live on the land that they have not owned for generations, feeding the city with the food they produce and their labor, and leaving behind a suffering and decaying village. “A paradise that one cannot leave is a hell,” as the author says, which is why the lack of choice is most painful, especially when we appreciate the fact that the accusations against the peasants are nonsense. Peasants are neither ignorant nor of low quality; they can manage their families well as long as their right of management is not taken away. We have a lot to learn from them and their life, such as their ability to slow down in a hasty world, their respect for nature, and their traditional lineage organization and culture.

Unfortunately and sadly, although this is a story about the author’s hometown, similar scenes are playing out in many others’ “hometowns” in China today. “People without a homeland would look for a paradise, while those who have it would return to their homeland,” the problem is: when we get tired or homesick and look back, will our homeland still be there waiting for us?

A profound sense of loss came over me while reading this book. Despite some flaws in logic and organization, it is a very worthwhile read. I hope it is not too late to protect our homeland, not only from the loss of land, talent, and even ancient trees, but also from the loss of a place where we can rest our souls.