Myanmar in the US Indo-Pacific Strategy: Why is China Winning and What to Do About It? 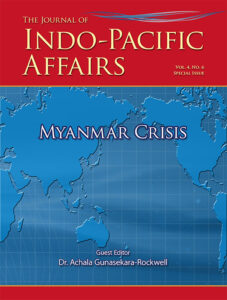 Abstract: The democratic reforms process which was initiated by the Tatmadaw (Myanmar’s military) in 2008 provided a window of opportunity for the US to curtail China’s influence in the region. Unfortunately, the US Indo-Pacific strategy’s focus on maritime zones of contestations caused Myanmar to be relegated to the periphery of Washington’s priorities in Southeast Asia. Washington’s limited goal of restoring Aung San Suu Kyi’s National League for Democracy (NLD) to power has alienated the Tatmadaw, causing a setback to the hard-earned process of democratic transition. While this has cost US a possible partner in the Indo-Pacific, China has emerged with relative gains after the Tatmadaw’s February, 2021 coup. With its influence over the ethnic armed organizations of the Northern Alliance in Myanmar – who haven’t yet signed the National Ceasefire Agreement – China has made itself indispensable to the political negotiations for national reconciliation. Beijing also continues to be the principal supplier of weapons and source of foreign direct investment for Myanmar. Given the present international ostracization, Tatmadaw has also had to lean closer to China for protecting itself against any censures and sanctions in the UN, and repairing the damage to its diplomatic ties with ASEAN. Consequently, Tatmadaw and Myanmar find itself in a tighter embrace with China strategically. All is not lost for US however, as the compulsions which incentivized the political shift in Tatmadaw’s domestic policy, continue to persist. Capitalizing on them would require Washington to reassess the strategic costs and benefits of its policy towards Naypyidaw, and accordingly, recalibrate the significance of that relationship in the larger regional calculus. A focus on ensuring peace and political stability, rather than restoration of NLD will go a long way in signaling US intentions to Tatmadaw. Tilting Tatmadaw and Myanmar away from China, in turn, would signal Washington’s seriousness regarding its goals in the Indo-Pacific to its strategic partners in the region.

About the author: Pawan Amin is a HYI Chinese Studies in India fellow.