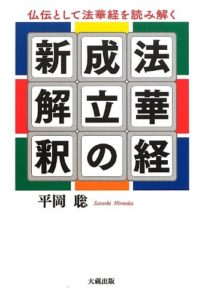 As one of the most important Mahāyāna scriptures and maybe the most influential Buddhist canon in East Asia, the Lotus Sūtra has drawn incalculable scholastic attention, among which is the problem of its formation. Although it seems that by the beginning of this millennium “all possible theories about its formation have already been exhausted” (P.33), in 2012 Satoshi Hiraoka brings up a new possibility to reconsider this problem, that is, to investigate it in terms of the Buddha’s life stories.

Except for the first chapter which offers a necessary retrospective summary of previous academic works on the problem of formation of the Lotus Sūtra, especially those which address the relationship between the Lotus Sūtra and Buddha’s life stories, the author arranges his argument into four chapters. Chapter two provides a synopsis of the development of Buddha’s life stories within different kinds of scriptures, and generalizes several elemental scenarios from those materials. The subsequent chapters focus on how and to what extent these elemental scenarios are reused and reshaped in the Lotus Sūtra. Dividing the Buddha’s life stories into three parts, namely, Buddha’s deeds in his previous life, his stories within this round of life, and stories after his nirvāna, the author points out the overlapping structures and correspondence between basic plots in the Buddha’s life stories and those in the Lotus Sūtra. In this way, the intention of the sūtra is understood as “to renew the history of Buddhism” and thus give rise to a “new Buddhism” (P. 214), which runs counter to the Prajñāpāramitā literature and the Vimalakīrti Sūtra in recognizing the soteriological possibility of śrāvakas and pratyekas and calling for an “eka-yāna” or “Buddha-yāna.”

It is also observed that elements in the Lotus Sūtra overlap most with the Buddha’s life stories transmitted by Sarvāstivādins (despite differences that are also recognizable). The author is cautious enough in reading this phenomenon, noticing that such coincidence might simply be attributable to the overwhelming amount of existent Sarvāstivāda literature compared to other Buddhist sects, and that the influence might not necessarily go one-way from Sarvāstivāda to the Lotus Sūtra.

The logic of the whole argumentation of this book is simple: firstly, the author makes a hypothesis that the Lotus Sūtra might be formed on the basis of the Buddha’s life stories, and then he testifies it in each part of the Sūtra. Unfortunately, the procedure of testification is highly biased by the hypothesis, to the point that some slight similarities are overly emphasized and raised to the position of “evidence”. Such a flaw could be excusable because the author himself also admits that what he hopes to do is just to “interpret” the formation of the Lotus Sūtra in terms of the Buddha’s life stories (P.35), and his conclusion is by no means objective and universal. But since new interpretations are expected to open up new possibilities for our understanding, we may still ask: what kind of possibility does this new interpretation bring to us? The answer perhaps lies in a reconsideration of the origin of Mahayāna Buddhism and its relationship with “mainstream Buddhism” at that time, or of the relationship between Buddhist literature and philosophical aspects. It is in this sense that this book is illuminating for the field of Buddhist Studies.