New Left Movements and Civil Society: Legacies of the 1960s 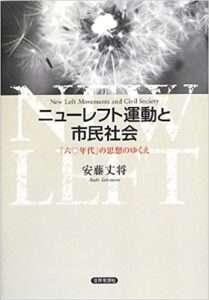 Why did the Fukushima Daiichi nuclear accident, the largest of its kind since the Chernobyl disaster in 1986, come to pass in a country marked by a vigorous and longstanding anti-nuclear movement stretching back to 1945, when the “Little Boy” and ”Old Man” were dropped on Hiroshima and Nagasaki? This question has led Japanese to think about not only the failure of the anti-nuclear movement, but also the “powerlessness” of citizens in Japanese civil society. Studying the development of social movements and their intersection with civil society in postwar Japan is an important task, but has been neglected for decades.

Ando Takemasa’s New Left Movements and Civil Society (2013) analyzes the “New Left media”—including the journals, newspapers, books, and other works written by Japanese New Left movement activists and sympathizers—in order to explore how the discourse of Japanese New Left movements has changed, and how this change has influenced civil society and politics in the 1970s. In comparison with previous scholarship on the issue—such as Oguma Eiji’s 1968 (2009), which strongly criticized the violence of the New Left movement against innocent people and their property—the author focuses on the formation, development, and transformation of the idea of self-revolution in “everydayness” (日常性), and argues that the constructive and disruptive legacies of the movement are inseparably intertwined. Certainly, this approach is not limited to the movements in a particular year such as 1968, but rather, it tries to place the changing discourse of “everydayness” within the movements into a longer term historical framework, and uses this to draw connections between the constructive and disruptive legacies of the movement. These legacies may be summarized as: the formation and development of the self-reflective idea that underpins “the power of citizens”; the narrowly delimited institutionalization of the movements; and the proliferation of aversion to direct action.

This book also provides an interpretation and explanation of why the New Left movements declined and lost support from citizens. Particularly in chapter 3, the author emphasizes the importance of the change in 1970 of Japan’s policing strategies away from their traditional style, which had focused on strengthening local communities and building ties with them as a cornerstone of public order. Due to the rapid urbanization of the time, the traditional communities of agricultural society were no longer functioning effectively in Japan’s cities. It thus became more difficult for the police to obtain information and support from those weak communities. As the movement’s direct activities become more and more radical, the mass media in 1970 began to portray the movement in negative terms such as “extremist groups” (kagekiha, 過激派), while the police attempted to exploit citizens’ worries about violent protests and to work with local residents to control New Left movements. In other words, the police once viewed within postwar Japanese society as ruthless agents of the government were recast in a very positive light—as servants to the public, protecting citizens from the violence of “extremist groups.” Not only because of the loss of popular support, but also due to the conflicts arising among New Leftists when they began scrutinizing their colleagues’ consciousness and behavior, members of the New Left became victims of intra- or inter-group violence and trauma. Furthermore, the open-ended personal transformation undertaken by these groups caused their participants endless mental stress. Activists struggled under the social and psychological pressure, and were ultimately unable to pass their experiments onto the next generation. Thus, chapter 3 provides a convincing interpretation of the failure of the New Left movements and the absence of direct action in social movements after the 1970s.

This book starts with the people’s movements for democratization in the early postwar period, discussing their various features. Chapter 2 focuses on the transformation and development of New Left movements in the 1960s. As noted above, Chapter 3 attempts to explain the failure of New Left movements. Chapter 4 explores how Japanese New Leftists practice self-transformation in their everyday lives after the movements’ decline, and the ideas and actions they bequeathed to Japanese civil society. Chapter 5, the counterpart to chapter 4, discusses why existing progressive parties such as the Japan Socialist Party (日本社会党) failed to gain support from new movements by comparing their experience with those of parties in other industrial countries. This failure meant that new movements―such as women’s liberation movements (ウーマン‧リブ運動) and residents’ movements (住民運動)―did not play a role in facilitating political transformation, and failed to build wider networks in the 1970s. In the final chapter, the author points out how the Fukushima Daiichi nuclear accident changed this situation and discusses the emergence of new movement cultures and the possibility of new politics in Japan.

Deciphering “the afterlives” of the New Leftists from “the New Left media” seems like an effective and persuasive method in this sociological study. But in order to answer how people conceive of and remember the New Left movements, further studies such as Yomota Inuhiko and Go Hirasawa’s 1968-nen bunkaron (『1968年 文化論』, 2010), which analyzes literature, comics, and films and depicts the movements using different styles and perspectives, are necessary. Unquestionably, this book is the latest significant work in the realm of postwar social movements. Hence, scholars and students interested in Japanese social movements and the history of everyday life will gain much from this book. Even contemporary Japanese activists could learn not only the history of the New Left movements that preceded them, but also understand how to avoid the same problems. Such an effort could allow the formation of new movement cultures, which liberate themselves while seeking to transform their way of living.