No.1 Flower Capital in Asia—the Oral History of the Development of the Flower Industry in Dounan 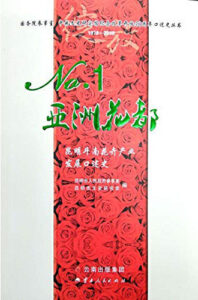 To honor the forty-year milestone of China’s Reform and Opening-up policy since 1978, the Counselors’ Office of the State Council launched a project of oral history documentation, which was undertaken by local research institutes of culture and history. The oral histories are representative of the successfulness of China’s reform from below. Under the tenet of the project, the Counselor’s Office of Kunming Municipality and the Kunming Institute of Culture and History published this book, No.1 Flower Capital in Asia, to celebrate how the flower town of Dounan has transformed from a fishing village on Dian Lake to Asia’s largest fresh-cut flower wholesale market.

Since the 1980s, along with economic reforms, villagers in Dounan successively began to replace their traditional vegetable crops with lucrative cut-flower varieties. During the 1990s and 2000s, Dounan gained the name of “Golden Dounan” (jindounan 金斗南) because many villagers made a fortune in the flower business. In 2017, Premier Li Keqiang visited the Dounan flower market and made a speech encouraging Dounan to become the world’s number one  flower market in the future. To a large extent, the transformation of Dounan from a village to a flower business hub is parallel to China’s economic surge as a country transforming from vast rural areas to urbanized zones in only a few decades.

No.1 Flower Capital in Asia documents the narratives of 34 figures who have been involved with the fresh-cut flower business in Dounan. These figures were once local farmers who still remember how they used to carry gladioli with bicycles from their fields in Dounan village to the downtown of Kunming city, which is 20 kilometers away. These figures are now managers and entrepreneurs who have been devoted to breeding new flower varieties and discovering advanced technologies for transportation. They are also official regulators and researchers who searched for technical support from the Aalsmeer flower auction market in the Netherlands and helped attract investments to finance the construction of local infrastructure.

Despite its ingratiating undertone, the book portrays China’s current achievements and prosperity through the people’s enduring hardship. As an anthropologist who has embarked on doctoral research on Dounan and the flower industry in Yunnan, this book has shown me that the most forgettable details that could have been ignored in any grand narratives are ingrained into the memories of the individuals. If readers care to find out about the first varieties of flowers grown in Dounan or how “Yunnan flowers” came into being, No.1 Flower Capital in Asia is a book to begin with.