The Nomad's Choice :The First Encounter Between Northern Nomads and Imperial China 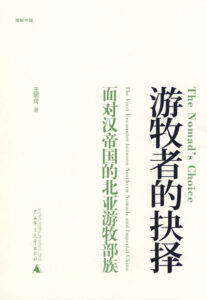 Professor Wang Mingke, a research fellow of Academia Sinica in Taiwan, has been studying nomads in China since 1992. In his two earlier books The Margins of Chinese Empire (1997) and On Qiang between Han and Zang (2003), Wang Mingke offered a new theory concerning the history of the Qiang People who inhabit an area along the eastern edge of the Tibetan Plateau between the Han Chinese and the Tibetans. He thinks the Qiang’s history reflects the ethnic groups’ boundary formation made by the Han and the Tibetans over a long process of exchanges. And he proposes a new perspective to examine the history of Han people and ethnic minorities from the ethnic margins.

In The Nomad’s Choice, Wang Mingke adopts the same perspective in studying the main nomadic ethnic groups in northern China during the Han dynasty. Based on the research of international anthropology and his own fieldwork materials, he analyzes how Xiongnu (匈奴), Xiqiang(西羌), Xianbei (鲜卑) and Wuhuan (乌桓) form the margins of the Han Empire through changes in zoology and interactions with the Han people.

The book consists of an introduction, six empirical chapters and a conclusion. In the introduction, the author tells readers his research motive and gives a brief overview of the book. The first chapter presents some important issues related to the field of European and American anthropology, such as nomadic economy, the modes of nomadic migration, political institution of nomad communities, etc. The second chapter discusses the origins and formation of specialized nomadic pastoralism in north China. In chapters three, four and five, the author discusses the Xiongnu, Xiqiang, Xianbei and Wuhuan’s economic and political organizations and the long history of relations between them and the Han Empire.

Affected by the environment and the modes of maintaining ecological resources in the Han Empire, these ethnic groups developed different nomadic social organizations: the Xiongnu Empire developed in the northern grasslands, the Xiqiang groups were organized as a “tribe” in the western tablelands and river valley, and the Wuhuan and Xianbei groups formed a “tribal confederacy” in the northeastern forests and grasslands. Chapter six further discusses the issues of zoology and changes in the northern and western groups.

The author provides a new perspective on the history of Chinese ethnic groups as the result of members of those ethnic groups choosing a particular representation under the influence of social realities. This version of history marks the emergence of a new paradigm for the research of Chinese history.

Besides the substantive conclusions and innovative methodology, another important value of this book is to expand people’s vision of “China”. Chinese academic circles have long been focused on agricultural culture to the neglect of nomadic culture. To most Chinese, agriculture was the foundation of Chinese culture. However, this book presents “the other” of the agricultural groups–the nomadic groups–and their relations with Han people, suggesting thereby that nomadic culture is inseparable from China. This book must not be ignored in discussing the whole “Chinese experience”.