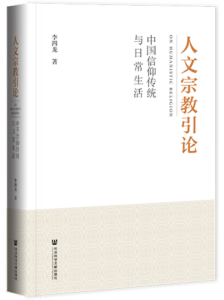 How to understand Chinese religion? Since the introduction of “religion” as a foreign word from the West in modern China, the answer to this question has given rise to a series of thoughts and controversies. In recent years, as Lou Yulie points out in the preface, “Chinese religion is different from Western religion, which has gradually become a consensus”. Li Silong’s new book, “On Humanistic Religion: Chinese Faith Tradition and Daily Life,” summarizes the basic characteristics of Chinese religion: Humanism establishes the Ben（本, fundamental, essential）, Ganying (感应, response, induction) as the Ti（体, features, styles, forms）. Unlike Western scholars who consider religion as the core of culture and the relationship between man and God as the key to supporting religious beliefs, the author draws on Xunzi’s famous quote, “The Junzi（君子） understand as Wen（文，culture）, while the people understand as God”, to point out that in Chinese religion, the relationship between “Wen” and “God” that is, the coexistence of ritual and religion, is far more important than the relationship between humans and gods. The author further summarizes “humanistic religion” as a basic type of world religion. In the introduction of this book, the author proposes five concepts to summarize the spiritual life of ancient Chinese people: humanistic religion, the Dao of Tian and human emotions, Ganying and interacting with Dao, Integration and symbiosis, and parallel use in mixed manner, which are also the main content of the five chapters of this book.

In the first chapter, unlike previous scholars who have focused mainly on Confucianism, the author further expands the field of study of “humanistic religion” into three areas: traditional religious life, foreign religions represented by Buddhism, and folk religious beliefs, then expounds them in detail in the subsequent chapters. The three areas are not isolated from each other, but are in close interaction, and the author emphasizes two sets of relationships: official religion and folk religious beliefs, local religion, and foreign religion. The author compares them to two axes of a three-dimensional coordinate system, while the third axis, which is a variable for understanding the history of religion in China, depends on a new set of thinking in religious studies. The author cites religious pluralism, religious market theory, and religious ecology theory as new third dimensions that constitute a three-dimensional thinking space for understanding Chinese religions. Among them, the authors further point out that the most fundamental factor in understanding Chinese religion is the self-identity of the religious individuals.

After identifying three main fields of study and two major structures of intrinsic relationships in Chinese religion, the authors further examine the religious views of the Chinese people. When it comes to religious views, it is necessary to explain the understanding of “god”. The author sorts out the cosmology of Qi as the starting point and summarizes two meanings of “god”, which leads to the relationship between “Wen” and “god”, which is also a new perspective for Chinese religious studies.

From Chapter 2 to the end of Chapter 5, the author begins to analyze the four characteristics of Chinese religions, starting with the religious life of ancient China, and summarizing the “Yin and Yang as well as five elements” and the “civilization of ritual and music” as two basic concepts that support traditional Chinese culture. They express the Chinese naturalistic view of the universe and the humanistic view of life respectively. The author then elaborates on “Ganying”, the “basic form of Chinese religious life”, as a mystical and intuitive way of thinking, which can be divided into two categories: “natural Ganying” and “Ganying with all living beings”. The author also focuses on the absorption and innovation of Chinese Buddhist Ganying thought, which is also a part of the process of its gradual Chineseization until it became the mainstream of Chinese culture. Unlike scholars who have previously limited themselves to the study of Confucianism, Buddhism, and Taoism and their interrelationships, the author concludes his book by expanding his vision to the field of folk religious beliefs. Although much of the religious life of the common people is directly inherited from the three, it also has many of its own characteristics. Furthermore, the author places special emphasis on the holistic nature of Chinese religion and examines the three aspects of folk beliefs: deities, rituals, and organizations, analyzing the internal organization of folk beliefs beneath their diffused surface, and attempting to reconstruct the wholeness of Chinese faith life after it has been dismembered by the term “religion” by pushing forward the research of previous scholars.

In the conclusion of the book, the author seeks to find a stable place for the discipline of religion in today’s university education system, arguing that the anchor point remains the humanistic spiritual tradition, which is not only a summary of the Chinese faith tradition but also an aspiration for future society. The presupposition that “religion is the core of culture”, as Western scholars used to believe, is not only inapplicable to Chinese culture, but is likely to not be commonly held by human society in the future. Instead, it will be replaced by the humanistic religion, the view of religion that originated in ancient China.

As an “introduction”, the book has undoubtedly clarified the core framework of the unique connotation, field of study, and system of relationships of “humanistic religion”. In the future, I am particularly looking forward to the author’s further explanation of the following issues. First, the author concludes that one of the two major relationships of Chinese religions is “official and folk”, so how to bridge the official ideology of Marxism and humanistic religious traditions today?  Secondly, the other group of the two relations is “local and foreign”, so why, among all foreign religious beliefs, only Buddhism has successfully merged with local Confucianism and Taoism, is this accidental or inevitable, and what does this mean? In addition, the author traces the classical Chinese term “Ganying” to the deep “self-identity”, which has its roots in Western humanities and social sciences. Is it possible to consider further interpreting “self” in combination with the understanding of Chinese culture? Traditional Chinese culture is more concerned with the sincere state of selflessness, and Buddhism has also made a fine distinction between the selfless and the true self.