The People’s Liberation Army and Chinese Politics: From the Cultural Revolution to Deng Xiaoping 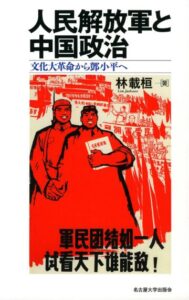 This study has three advantages over previous studies. The first is its concrete theoretical framework and innovative perspective. This book successfully shows readers a new interpretation of military government during the Cultural Revolution using institutionalism and rational choice theory, investigating important features such as the personnel management system and organizational restructuring. It clarifies Mao’s perspective (and also Deng’s in part) by using rational choice theory. It is obvious that this book makes a big innovation in the study of Chinese history in Japan.

The second point is that this book demolishes commonly accepted hypotheses by using newly published primary documents such as memoirs of politicians and other restricted publications. The most interesting part of this book is a new interpretation of the Lin Biao (林彪) Incident. According to historical accounts by the Chinese Communist Party, the increase of PLA intervention in politics was correlated with Lin’s political authority. However this book disproves this hypothesis, showing that the political intervention of PLA was designed by Mao. Lin was just an agent who made a connection between Mao and the PLA.

Referring to the superior points noted above, no one can deny the achievement of this book. However some important actors’ perspectives are still missing in this work. The perspectives of the “Gang of Four” and Hua Guofeng (华国锋) are critically important to explain the Cultural Evolution era. This study should have explained the relationship between these important actors and the dictator, even though the main focus of this book is the perspective of the dictator.

In conclusion, this book is one of the best studies of the relationship between the dictator and the PLA during the Cultural Revolution.