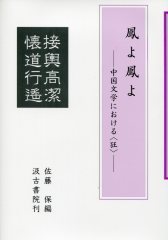 “No other ethnic groups love the word ‘madness’ more than Chinese.” In his book Mojiyushin (文字遊心), Shizuka Shirakawa, a prominent Japanese Sinologist offered this perceptive remark on the significance of the word 狂 kuang (madness). Indeed, the concept of madness, with an extraordinary richness of meaning, has not only made an unparalleled contribution to the history of Chinese thought, its influence has also permeated Japanese philosophy and literature.

The concept of madness in Chinese thought, in general, can be divided into two mainstreams: 狂狷 kuangjuan (ardent yet cautious) and 佯狂 yangkuang (to feign madness). Both trace their origins back to the Analects. The former appears in Book 13:

The Master said, “If I am unable to find a man of the middle path with whom to associate, then I must turn to either the ardent or the cautious. The ardent are eager to advance; the cautiously refrain from certain deeds. ”

Although the original meaning of the Chinese character 狂 kuang carried a negative connotation, Confucius augmented its use with an affirming perspective. According to his words, a man of kuang is enterprising and self-motivated, while a man of juan is cautious and self-disciplined.

The other type of madness, yangkuang, is portrayed in Book 18:

Jieyu is a fictitious hermit who put on a disguise of madness. From ancient times to the pre-modern era, yangkuang played an important role in the life of many Chinese literati who used it as a ready excuse to protect themselves from being coerced into political affairs.

Phoenix, Oh Phoenix, titled after the words of Jieyu in the above passage, is a collection of essays by a group of outstanding scholars who formed a research society chaired by Professor Tamotsu Sato of Ochanomizu University.

The book consists of ten papers contributed by eight scholars; five from Chinese classics, three from Japanese classics and two from Chinese modern literature. The following is a brief synopsis of each paper:

Chinese classic literature Mitsuko Yajima (Asia University) presents two papers: the first describes the development of the concept of kuang throughout the time of Confucius, the Han dynasty and the Six Kingdoms, with an emphasis on yangkuang; the second paper focuses on the word kuanghua (mad flower) in the work of Yu Xin. Mayumi Taniguchi (Nagano Prefectural College) surveys the usage of the character kuang in the poems of the Tang dynasty. Kiyomi Murakoshi (Keio University) examines the expression of kuang in the ci poems of the Song dynasty. Yoko Onishi (Hitotsubashi University) introduces a painter, Zheng Sixiao, who showed fanatic resistance against the Yuan government.

The range of meaning that kuang conveys is so vast that it is hardly possible to exhaust all of its usages and significance in a single publication. To support further examination on this intriguing topic, the book provides, as an appendix, a list of related academic writings and a summary for each.

It is evident that further research studies on relevant topics, such as the Yangming School of Neo-Confucianism, novels and arts in the Ming and Qing dynasties, are pivotal to gaining a deep understanding and appreciation of the distinctive role that kuang has played in shaping Chinese culture.