Plato: A Now and Then of the Ideal State 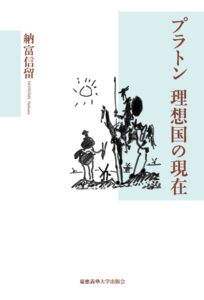 This book is probably the first exhaustive survey on the reception of Plato’s Republic in modern Japan from late nineteenth century to the present day. Noburu Notomi, professor of Keio University and former president of International Plato Society, meticulously examines many long neglected materials and provides readers with an invaluable report. However, this book aims not only to be a bibliographical and historical guide but also to present philosophical speculations on the presence of the Republic in the contemporary world. According to Notomi, the main purpose of the Republic is to contemplate the ideal state, and modern Japanese scholars read this magnum opus as an inquiry into the nature of such a state.

The book consists of three parts:

I. The Republic as a mirror of the current state

II. Reception of the Republic in modern Japan

III. The Republic for the future

In Part I, Notomi starts by stating that the Republic is primarily a treatise on justice, and the book has a special meaning for contemporary readers in a sense that it directly links political justice and personal justice (i.e., justice in soul that is closely related with human nature). Then, Notomi turns his eyes to a recent debate on justice by Michael Sandel, and he points out that Sandel does not pay much attention to justice in Plato’s dialogues. Notomi conjectures that there are several possible reasons: (1) Plato’s dialogues sometimes raise a radical skepticism on justice that is too dangerous to face; (2) Plato’s political thought was criticized as an archetype of totalitarianism, especially by Karl Popper; (3) Plato repeatedly talks about justice in soul but it does not fit well with modern frameworks.

Regarding these issues, Notomi says that (1) cannot be a reason to avoid Plato but should be a reason to read Plato more seriously. (3) only suggests that there is an important issue in Plato that has been neglected by modern ethical theorists. And he insists that, as many scholars have already suggested, (2) is simply a wrong interpretation of the Republic. However, Notomi’s primary concern is not to rebuke this misinterpretation again but to evaluate its influence and a reaction to it. Because of (2) and (3), many advocates of Plato tried to understand Plato’s intention to write the Republic not as to provide a genuine political theory, but as to provide an ethical theory of justice to be realized in a person laden with a huge political metaphor. They say that Plato’s analogy between soul and polis (πόλις) is nothing but an explanatory device to make clear what justice in soul should be, and the metaphor needs not be taken literally. Against this, Notomi insists that one must take the analogy of person’s soul and polis at face value, and we need to pursue justice in both soul and polis equally. For Notomi, Popper’s totalitarian interpretation of Plato is wrong but swinging far to an apolitical interpretation also does not square with Plato’s aim.

In Part II, Notomi carefully disentangles the complicated history of the reception of Plato in modern Japan. Since it is impossible to pay due attention to every subtle detail, I must be satisfied with listing a few of the scholars Notomi mentions in the book and pick up a couple of important points: Kazunobu Kanokogi (鹿子木員信), Hiroyuki Katō (加藤弘之), Takatarō Kimura (木村鷹太郎), Ikki Kita (北一輝), Kiyoshi Miki (三木清), Shigeru Nambara (南原繁), Amane Nishi (西周), Hajime Ōnishi (大西祝), Shinkichi Uesugi (上杉慎吉), Tetsurō Watsuji (和辻哲郎), etc. Getting through all the stimulating and exciting details, the historical shift Notomi draws can be summarized as below: In pre-war Japan, people who belonged to different political groups such as socialist, communist, nationalist, Christian, etc. read Plato’s Republic from various viewpoints. A common motivation lies in the idea of the ideal state (理想国, Risōkoku) that was the popular title of the Republic in pre-war Japan and this idea played an important role for them in search for a better society. They all took Plato’s Republic as a serious political book and Notomi’s historical survey shows that even the Japanese word “理想” (Risō) that means “ideal” was originally coined in the process of translating Plato. In post-war Japan, however, Plato’s Republic drastically lost its political drive. The title changed from “Ideal State” into the more neutral “Nation” (国家, Kokka) and scholars’ interests shifted into philology and detailed philosophical arguments.

Notomi provides readers with a more detailed interpretation of the Republic in Part III to support his commitment to the political reading. According to Notomi, one implication of the original Greek title “Politeia” (Πολιτεία) is the polis constituted by citizens whose soul is in just condition. Since Plato uses the term Politeia to indicate an ideal political state that demands the interdependent relationship between just citizen (πολίτης, politēs) and just polis, one should not understate the importance of realization of just polis in realizing justice.

Notomi then gets into a very difficult passage (Book IX, 592A-B) where Socrates says that the ideal polis is “in heaven.” If a reader interprets this phrase as one that means the ideal polis is nothing but a utopian ideal that can never be realized, it seems to be a strong support for the apolitical reading of the Republic. Notomi, however, argues that “heaven” in this phrase does not mean the realm of Platonic Ideas that can never be practically reached, but a celestial body that belongs to our world. Thus, according to Notomi, Socrates actually believed in the realizability of the ideal polis and his long story in the Republic is not just a metaphor or a daydream.

Finally, Notomi tackles one fundamental issue that has not been touched directly so far: Is there still a point in discussing “ideal” in the contemporary world? He recalls Kant as an ally and reminds readers that Kant said in his Critique of Pure Reason that there is practical importance in Plato’s Idea. Indeed, it is required as a model and principle that leads and motivates our practice. Next, Notomi introduces a distinction between Idea and ideal: the former corresponds to a true being and the latter to the exemplification of the former through language (λόγος, logos). Notomi insists that Idea substantiates our endeavors to acquire a better state and the latter actually serves as a medium to get close to the former.[1] Notomi’s following step is to emphasize the importance of one’s persevering in striving to get close to Idea. According to this last remark, even Karl Popper can be counted as an heir of a Platonic spirit as far as he participates in the inquiry of an ideal state, as did thinkers in pre-war Japan.

I want to raise one question as a concluding remark: Did Notomi really reply to the question he set at the beginning? In Part I, he refused to accept both the totalitarian interpretation and the apolitical interpretation of Plato. He said that we need to take Plato’s Republic as a book that provides a genuine political theory. Surely this makes readers expect another serious (ethico-) political theory to come. However, his argument in Part III does not seem to form a direct reply to this expectation. Notomi’s interpretation may give readers an impression that one would better render Plato’s Republic not as a book that develops a specific political theory but more as a book on the importance of unceasing debate on politics in general.

The question above of course is never to lessen the invaluable contribution Notomi has made. This book is full of devoted sober investigations too many to pay due attention to in this short review, and is even philosophically provocative. Scholars from various fields such as ancient philosophy, political theory, and modern Japanese intellectual history will equally enjoy and benefit from reading this book.

[1] Here, agreeing with Giovanni Ferrari (pp.264-5), Notomi points out that the fact that Plato wrote the book becomes important. His agreement with Ferrari made me wonder how Notomi assesses Ferrari’s interpretation of the Republic, for he criticized it as an a-political interpretation in Part I, and how far the a-political reading criticized in Part I and his own reading of Republic in Part III are distanced in essence.