The Plight of China's Working Class: Annals of Anyuan 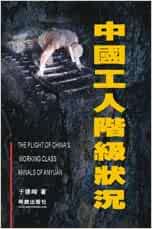 On May 1, 2001—the first International Labor Day in the new century—Yu Jianrong took a train to Anyuan to look for the “past, present and future” of the Chinese working class. Anyuan, a small town in China’s Jiangxi Province, is widely known for its long history of coal mining—one of the earliest industries developed during the Xinzheng Reform in the Late Qing Dynasty. For one and a half century, the miners in Anyuan not only have shown to the world their revolutionary might and potential under various Chinese regimes, but also have become themselves a symbol of the plight and sacrifice both by the Chinese working class during the country’s long, tedious and occasionally dramatic journey to modernity.

In the four years after his first trip, Yu Jianrong became a frequent visitor to this small mine town in East China. He stayed in filthy small local inns, dined at the worker’ makeshift canteens, became acquainted with many coal miners, worked with a cautious government archivist, interviewed street pensioner protesters and even went down to the deepest well of Anyuan’s coal mines. His book, Annals of Anyuan, is the much applauded outcome of Yu’s four-year journey with the Anyuan miners. Based on the rich first-hand materials he collected during the trips, Yu Jianrong recorded vividly the Anyuan workers’ collective memory of the small town’s glorious revolutionary past as well as the misery, frustration, disbelief and betrayal they had to experience under the high tide of China’s market reforms. But Yu Jianrong went beyond the already attractive account of what is taking place today in Anyuan; as a social scientist, he uses various theoretical tools—both Chinese and Western—to explain the ideas, actions and identities of today’s Anyuan miners and the subtle connections between the past and present. Through this carefully studied case of Anyuan, Yu Jianrong aims at deconstructing the concept of “working class” and providing his readers a larger picture of the transformation of the Chinese working class at large from 1922 until today.

At the invitation of Professor Elizabeth J. Perry, Yu Jianrong visited the Harvard-Yenching Institute in 2004 as a visiting scholar under the Institute’s faculty-sponsored collaborative research program. Most of this book was written during his stay at the Institute. In the preface to Yu’s book, Elizabeth Perry—who is currently writing a long anticipated book on the revolutionary tradition of the Anyuan labor movement— highly praises the work as “an extraordinary book that is at once a carefully researched and cogently argued academic study, a colorful and entertaining travelogue, a revealing journalistic report, and an impassioned interpretation of the plight of the contemporary Chinese working class.” She concludes that “Yu Jianrong has written the Chinese counterpart of E.P. Thompson’s masterful study of the English working class.” Dr. Yu’s Anyuan Annals is indeed a must read for anyone who is interested in the transformation of modern China, the Chinese reform and revolution, the Chinese society, or contentious politics and comparative labor studies in general.