Poetic Zen, Mad Zen, Female Zen- An Exploration of the Literature and Culture in Chinese Zen 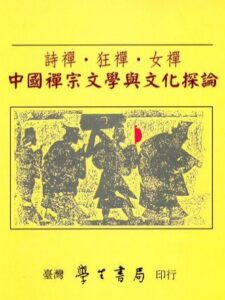 In this book, Professor Jing-Jia Huang discusses the close relationship between Zen Buddhism and Chinese literature and culture, using the poetry by BaZhiTouTuo (八指頭陀, literally means: eight-fingered monk), an eminent Zen poet-monk in the late Qing dynasty, and biographies of Buddhist Zen masters as her primary resources. Firstly, Huang points out that in the past, scholars often focused only on poets to explore the influence of Buddhism on their works, but have paid less attention to the literary achievements of Buddhist monks. Moreover, in the discussion of the biographies of the Buddhist Zen masters, less attention has been paid to the mad monks (狂僧) and laywomen in Zen tradition（禪婆）. Therefore, this book mainly covers three separate parts: Chapters 2 to 4 mainly discuss patriotism, spirit, and aesthetics in BaZhiTouTuo’s poems. Chapter 5 analyses the descriptions of the mad monks in the biography of the Zen masters and the religious connotations they represented. The status of laywomen in Zen Buddhism is explored in Chapter 7.

In Chapter 2, Huang describes the life of the BaZhiTouTuo and the chaotic situation of the late Qing dynasty in which he lived, thus establishing the context of his works. In particular, Huang points out that due to hardship in his childhood and a lack of education, as well as his pursuit of perfection, BaZhiTouTuo was always striving to compose poems (苦吟). In his middle age, his poems were already being praised by the literati and Buddhist community of the time. Based on the study of Chapter 2, Huang explores the multifaceted connotations of BaZhiTouTuo’s poetry in terms of his personal feelings, his patriotism of China, and his enlightened state. It can be seen from his poems that BaZhiTouTuo was not only emotionally rich but also a monk caring for his country. This is the reason why the BaZhiTouTuo is often referred to as the “patriotic poet-monk” (愛國詩僧). However, Huang proposes that if one over-emphasized the status of BaZhiTouTuo as a patriotic poet-monk, one would neglect his deep spiritual cultivation. Therefore, it is necessary to analyze and appreciate BaZhiTouTuo’s poetry along with his profound achievement in Zen practice to grasp the essences of his poetry. In Chapter 4, Huang focuses on BaZhiTouTuo’s famous poetry works on plum blossoms (詠梅詩), and analyzes BaZhiTouTuo’s spiritual world presented in the poem. Huang argues that unlike the mundane literati in the past, who often used external objects to express their personal feelings, BaZhiTouTuo composed poetry on plum blossoms as a means to express his deep understanding of Buddhist truth.

In Chapter 5, Huang analyzes the descriptions of mad Buddhist monks in Tang Dynasty recorded in Song-dynasty Biographies of Eminent Monks (《宋高僧傳》). She summarizes that mad monks in those biographies had the following three characteristics: 1.They were both foolish and wise and could freely perform supernatural abilities (神通); 2. They drank wine and ate meat and broke the restriction of precepts; 3. They could accurately predict the future. Those supernatural phenomena are meant to show the profoundness of those mad monks in their practices. Moreover, to rebel against the rigescent Buddhist practices, those mad monks deviated themselves from the traditional rules of Buddhism. These transgressive acts were a kind of rebellion and warning against the gradual stereotyped Buddhist practice. From the Fiction of the Tang Dynasty (唐代筆記小說) containing various stories of mad monks to the official inclusion of Buddhist monks in Song-dynasty Biographies of Eminent Monks, it can be said that through official writing, official recognition was given to those idiosyncratic mad monks who were worshipped or believed in by the societies.

In Chapter 7, Huang portrays laywomen’s image in Zen Buddhism during the Tang dynasty through dialogues between a Zen master and laywomen in Zen Lamp Records (燈錄). Huang draws several characteristics from those dialogues that distinguish laywomen in Zen tradition from Buddhist nuns: 1. In the records, Zen masters can learn from those laywomen, showing the respect and affirmation of female practitioners in Zen tradition. 2. On the social level, these women were actively involved in social activities, and they practiced in their daily life activities. Those phenomena were fully demonstrating the secularization of Buddhism in the Tang dynasty. 3. In their conversations with Zen masters, those laywomen usually used common expressions or even slang instead of using professional Buddhist terminologies. Nevertheless, the laywomen were able to challenge the authority of the Zen masters. These phenomena are evidence of the high spiritual achievement of the laywomen. Unfortunately, after the Song dynasty, the records of Buddhist laywomen diminished.

Interestingly, between Chapters 5 and 7, Huang inserts Chapter 6 to discuss three different ways to represent Zen masters in three collections of biographies: Song-dynasty Biographies of Eminent Monks (《宋高僧傳》), Jingde Record of the Transmission of the Lamp (《景德傳燈錄》), and Record of Chan Masters in Chan Temples (《禪林僧寶傳》). Huang argues that it is impossible to reconstruct the past objectively because history contains more or less subjective interpretations of the past by historians. Moreover, besides the authors, the readers, and the cultures all influence how the works were written and understood. From this point of view, biographies are already a reconstruction of the protagonists’ life. Therefore, this chapter focuses not on the authenticity of those biographies, but on how the authors of these biographies presented the characteristics of the protagonists. In brief, the Song-dynasty Biographies of Eminent Monks focused on the Zen masters’ life histories and supernatural abilities. In contrast, the Jingde Record of the Transmission of the Lamp emphasized how Zen masters attained enlightenment and their inspiring dialogues with others, portraying the Zen masters as wise and farsighted figures. On the other hand, the Record of Chan Masters in Chan Temples was a synthesis of the two, recording both Zen masters’ lives and their dialogues. In addition, Record of Chan Masters in Chan Temples also discussed and criticized the maladies in the development of Zen Buddhism, and therefore it can be regarded as both a biography and a compendium of Buddhist clergies.

However, if Chapter 6 could be moved before Chapter 5, it might make Chapter 5 to Chapter 7 more coherent. The reason is that, in the discussion of the mad monks in Chapter 5, Huang quotes records from Song-dynasty Biographies of Eminent Monks, while, on the other hand, in the discussion of female home-based monks in Chapter 7, Huang quotes many records from Jingde Record of the Transmission of the Lamp. Therefore, if the conclusion of Chapter 6 can be used as background knowledge before discussing the mad monks in Chapter 5 and the laywomen in Chapter 7, it would be possible to see more clearly the presuppositions and attitudes in those records, and how those authors wanted to present images of protagonists to the readers. Furthermore, some of the mad monks, such as Hanshan (寒山) and Shi De (拾得), were not only recorded in Song-dynasty Biographies of Eminent Monks, but also Jingde Record of the Transmission of the Lamp. Therefore, in Chapter 5, if Huang could compare the depiction of the same mad monk in different biographies, perhaps it could better echo the study of Chapter 6 and make the discussion more complete.

The contribution of this book is that it will awaken studies on the poet-monk, the mad monk, and Buddhist laywomen who have been neglected by the academy for too long in the past. Moreover, this book shows that in addition to the traditional literary studies, perspectives from religious studies (in this book, Buddhist studies) may bring out the profound meanings of religious-related poetry and even literary works. Such an approach can not only bring new perspectives to the discussion of Buddhism and Chinese literature, but may be able to be applied to the studies of the interaction between other religions and literature. In addition, Huang has included in the appendix a list of mad monks from the Song-dynasty Biographies of Eminent Monks, as well as a list of laywomen in Anthology of the Patriarchal Hall (《祖堂集》) and Jingde Record of the Transmission of the Lamp, which are very convenient for future researchers in this field. As Huang concludes, there is still plenty of room for studying the relationship between literature and religion. This book is an excellent place to start for scholars or even students.