Pook at Paninindigan: A Critical Appraisal of Pantayong Pananaw 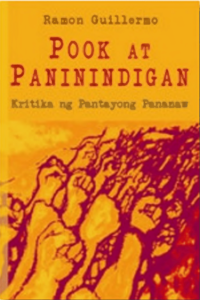 Diliman, Quezon City: The University of the Philippines Press, 2009, 210 pages

Prof. Ramon Guillermo’s book, Pook at Paninindigan: Kritika ng Pantayong Pananaw, may well be one of the most comprehensive scholarly evaluations of pantayong pananaw (translated as the ‘from-us-for-us perspective’ in Philippine historiography, as translated by Guillermo himself in another publication) as an intellectual movement in contemporary Philippine scholarship. The pantayong pananaw (also called Bagong Kasaysayan, or New History) is currently the most theoretically elaborate articulation of an indigenized social science perspective that offers a viable alternative to (Western) positivist social science. The pantayong pananaw is the brainchild of Prof. Zeus Salazar, a historian who spent most of his teaching career at the Department of History at the University of the Philippines-Diliman; in the course of his advocacy, Salazar was able to gather a number of historians who shared his call for a more culturally-sensitive historiography in the teaching of Philippine history. At present, the pantayong pananaw has become an established perspective in Philippine historiography and has spread outside the University’s own Department of History.

In broad strokes, pantayong pananaw’s approach begins with the need to sustain a talastasang bayan (national discourse) by distinguishing among different historiographies and how they relate to the formation of national/cultural identity. The first, the pangkayo perspective (‘from-you-for-us’ perspective), refers to the judgments made by external agents upon one’s culture; the pangkayo perspective mainly refers to colonial historiography that judged Filipinos’ beliefs and customs using purely external cultural standards. Opposite to this is the pangkami perspective (‘from-us-to-you’ perspective), which was initially espoused by a generation of intellectuals who were educated in Spain and then responded to the accusations of colonial historiography regarding aspects of Filipino cultural heritage. They were succeeded by Filipino scholars who wrote about Philippine culture and society using English or Spanish, the ‘languages of the colonizers’, as a medium of discourse. Salazar, on many occasions, specifically faults this reliance on foreign languages, betraying its intent to engage mainly with outsiders rather than with agents in local communities who alone were the ‘insiders’ of their own culture. The pantayong pananaw, therefore, seeks to create a ‘closed circuit of interaction’ (Mendoza 2007) between academic discourse (especially history) and kaalamang katutubo (indigenous knowledge). In this regard, language plays a central role; hence, historians identified with pantayong pananaw speak and write in Philippine languages so that the talastasan (discourse) is always oriented toward local cultures and not to ‘outsiders’ and their interests.

Guillermo organizes his critical appraisal of the pantayong pananaw into two chapters. In the first chapter, titled Pook (Location/Place), he recognizes the importance of Salazar’s ideas in challenging positivist historiography that, in the end, privileges the imperialistic dominance of Western discourse. Nevertheless, he proceeds to pinpoint specific weaknesses in Salazar’s arguments, in particular regarding the exclusive use of Philippine languages in discourse and the process of forming a pambansang kalinangan (national culture). Regarding the use of language, Guillermo criticizes Salazar’s uncompromising rejection of concepts that do not originate from Philippine languages as automatically ‘Western’ or ‘foreign’. A classic example is the Tagalog word himagsikan, which is akin to the Western concept of revolución (revolution): Salazar distinguishes himagsikan and revolución, and he refuses to accept revolución as a meaningful category in the Philippine context, notwithstanding the fact that it was already translated into Philippine languages and already used extensively in everyday discourse. The point is that such a closed attitude toward concepts originating outside the local culture preempts the possibility of appropriating these concepts within local discourse. Moreover, Guillermo notes that the exclusive use of local languages does not itself address the issue of specialized and everyday discourses that also create hierarchical relationships within the users of that language.

Regarding the concept of pambansang kalinangan (national culture), Guillermo evaluates the pantayong pananaw by juxtaposing it with Marxist historiography; he then faults Salazar’s inadequate dialectical conception between the ‘elite’ and ‘bayan’ (roughly translated as ‘country’) as an expression of a conflict in the cultural domain but devoid of any reference to the larger political-economic struggles. Salazar, he observes, has emphasized the elites’ pagbabalik sa bayan (a return to the country’s cultural roots) but has not given the same attention to class inequality and exploitation, which for Guillermo are more important and pressing issues. The author notes, quite differently from Salazar, that cultural independence should serve as a means to greater economic and political independence, and not an end in itself. Neglect of this fundamental principle tips the pantayong pananaw dangerously toward cultural essentialism, which may be utilized by dictatorial regimes to back their totalitarian claims by alluding to essentialist notions of Filipino culture, history and society.

In the second part, titled Paninindigan (Principled Commitment), Guillermo outlines the development of indigenized Marxist/socialist thought in the Philippines. Starting with a closer look at the political thought of Emilio Jacinto of the Katipunan (the revolutionary organization that spearheaded the 1896 Revolution against Spain), Guillermo unpacks local notions of class-based exploitation and emerging class consciousness among the peasant class. After the 1896 Revolution, a generation of writers continued the propagation of socialist discourse by tackling various social ills plaguing Philippine society, particularly the continued exploitation of the working class. Their writings, however, still alluded to the possibility of a ‘change of heart’ on the part of landowners, and thus still fall short in terms of a full-blown theory of class struggle; this only develops in the 1930’s with the establishment of the Partido Komunista ng Pilipinas (PKP), workers’ unions and peasant organizations. This particular development enabled writers of succeeding generations to combine social analysis and criticism with unionized organizing and calls for digmang bayan (nationalist struggle). The painstaking exposition of the development of Marxist/socialist discourse in this chapter is Guillermo’s response to Salazar’s statements that Marxist/socialist thought in the Philippines is completely an “outsider’s discourse” that cannot fathom the intricacies of Filipino cultural experience. In this chapter, Guillermo specifically demonstrates how local constructions of exploitation, class consciousness and class struggle emerged at critical junctures of Philippine history. External influences eventually found their way into local discourses, but such appropriations of ‘outsider concepts’ should not be shunned because they can be as powerful in the local context as ‘indigenous’ concepts.

Guillermo’s book, in summary, contains a straightforward critique of pantayong pananaw as articulated by its most prominent spokesperson. His familiarity not only with the entire corpus of Salazar’s scholarly work, but also with other thinkers identified with pantayong pananaw and its critics, enables him to provide a comprehensive synthesis of this emerging intellectual perspective. This book stands as the author’s most nuanced treatment of pantayong pananaw, which was also the subject of a number of his earlier scholarly writings (e.g. Guillermo 2003).

Aside from the critical assessment of pantayong pananaw, Guillermo’s work accomplishes an important task by challenging various indigenization efforts in current Philippine scholarship. Calls for the indigenization of concepts and methodologies have been raised in other social science disciplines, notably in psychology with Sikolohiyang Pilipino (Filipino Psychology) and in anthropology with Pilipinolohiya (“Philippinology”, which is distinct from “Philippine Studies”). The questioning of dominant positivist perspectives by pro-indigenization scholars is a noteworthy endeavor, as Guillermo himself observes; there is the need, however, to assess whether such attempts are premised upon essentialist notions of culture, history and society. The author’s contribution to Philippine scholarship lies mainly in his adamant refusal to reify Philippine history and cultural heritage, which results to the unfortunate tendency of closing oneself not only to useful external influences from other cultural experiences, but also to the broader socio-economic realities that are at work within that society. Guillermo’s call for a ‘dialectical’ approach to Philippine scholarship combined with his advocacy for authentic liberation from exploitation is a call that is worthy of attention, and whether scholars will eventually disagree with certain aspects of this frame of thought and action will not invalidate its timeliness in the task of crafting the course of social sciences and humanities in the Philippines.