Popular Music: A Study in Semiotics of Communication 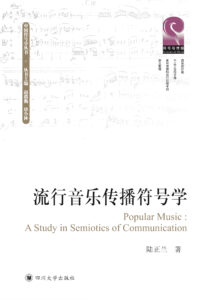 Popular Music: A Study in Semiotics of Communication by Lu Zhenglan should be regarded as a milestone in semiotics of communication today. Popular music increasingly plays a more significant role in shaping Chinese popular culture today, however, the theoretical studies on it are still rare in academia. Although musical semiotics has been developed as early as the 1960s, its focus has always been on classical music but not popular music. Moreover, the cultural communication of popular music is much more complex than the classical one, thus the traditional research mode of the latter might not be apt to explain the former, especially its meaning of production and social functions. In other words, the development of popular music calls for its own research paradigm.

Due to the above, the current book is of great importance, since it endeavors to construct a semiotics of communication that attempts to solve the sociocultural issues in Chinese popular music today. Professor Lu Zhenglan, the author of this book, is a leading scholar in semiotics of music and art. Her pioneering works in music including A Study of Lyrics (2007), Song and Gender (2013) and so on, lays a foundation for the formal-meaning studies of the popular music. As she argues in this book, popular music is a unique meaning system composed of language, musical sound, performance, images etc., thus we should consider its own signifying features that are different form the other types of music. To achieve this aim, this book, following the trichotomy of syntax, semantics, and pragmatics, elaborates on popular music’s textual formation, meaning communication as well as its social influences, and then abstract the mechanism and theories of the popular music semiosis.

Popular Music: A Study in Semiotics of Communication is important not only because it constructs the semiotic theory of popular music, but also because it provides a communicative approach to ponder on semiosis of popular music. According to the author, it is the intersubjectivity but not the subjectivity that exists in every step of popular music semiosis, namely, lyrics writing, composing, singing, communication and receiving. Thus, the study of popular music, should involve all the perspectives from lyrist, composer, singer, media institution and audience, and then exploring its communicative or intersubjective meaning. And this intersubjective feature just accords with the popular or mass culture today. Popular music as the mass culture is featured as its public participation and practice: The listeners or audience as the participants of other mass culture, play a key role in signifying the process of popular music. They are not only the receiver but also the sender of music semiosis, co-participating in the meaning producing of the popular music. Hence, the meaning of cultural products is achieved in the communications between others, and it is shaped by and will in turn reshape the sociocultural community.